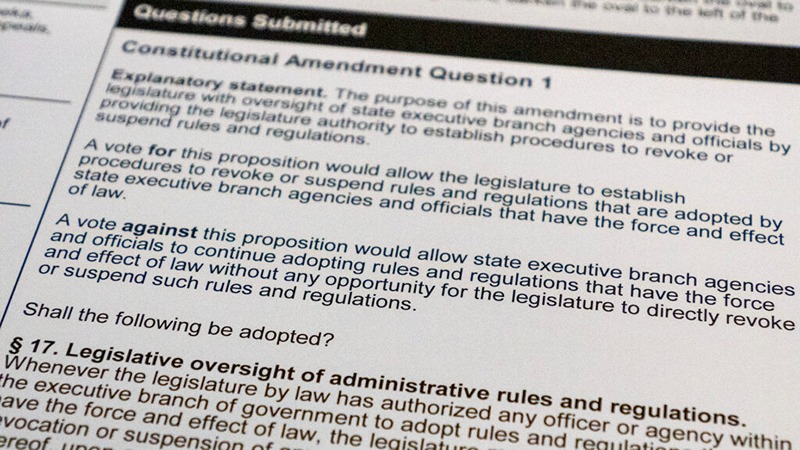 Kansas voters easily endorsed an amendment Tuesday to the Kansas Constitution on election of sheriffs, but a proposed amendment granting the Legislature more control of state rules and regulations appeared headed for defeat. (Sherman Smith/Kansas Reflector)

TOPEKA, Kan. — The state’s voters embraced an amendment to the Kansas Constitution on Tuesday requiring election of county sheriffs and narrowing options for ousting a wayward chief law enforcement officer, while an amendment granting the Legislature more authority to reject state administrative regulations could be headed to defeat.

Unofficial results on the bottom-of-the-ballot constitutional questions showed 549,972, or 62%, supported the sheriff amendment and 343,111, or 38%, were opposed. Passage would sustain the practice of electing sheriffs in 104 counties — only Riley County would be allowed to continue appointing a sheriff because it operates a city-county policing agency.

The amendment would end the opportunity for a county attorney to bring ouster proceedings against a sheriff. The two remaining paths to removing a sheriff would be through a citizen petition or action by the state’s attorney general.

“The sheriffs amendment would take away power from our local county attorneys and concentrate that power in one office,” said Amii Castle, professor of law at the University of Kansas.

Meanwhile, 451,477, or 51%, were opposed to the amendment delivering to the Legislature power to veto or suspend rules and regulations written by the executive branch. The vote was close with 440,790, or 49%, eager to approve the amendment.

The Kansas Legislature placed both amendments on the November ballot, a move requiring two-thirds majorities in the House and Senate.

Kansas Board of Education Recommends Removal of American Indian Mascots