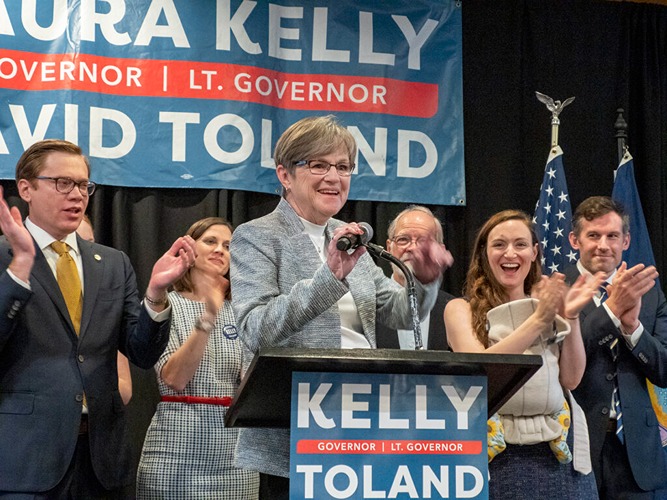 TOPEKA, Kan. — Kansas Gov. Laura Kelly has won a second four-year term, defeating Republican Derek Schmidt in a campaign that pitted her economic accomplishments against his transphobic appeals and attacks on pandemic policies.

Schmidt congratulated Kelly on her “apparent reelection,” pending a tally of remaining ballots, and said “absent any unexpected development, it appears this race is over.”

Kelly led by 14,000 votes with about 3,000 ballots remaining to be hand counted from three rural Kansas counties. There were up to 29,000 mail-in ballots that still could be returned, and an unknown number of provisional ballots to be considered.

The governor’s win comes three months after Kansans overwhelmingly rejected an anti-abortion constitutional amendment that Schmidt supported. Kelly positioned herself as a fierce supporter of reproductive health rights, but didn’t make it a focal point of her campaign.

Instead, Kelly emphasized her support for public schools and attention to the state budget, private business investments, and record low unemployment rate. Schmidt attacked Kelly’s management of the COVID-19 pandemic and vetoes of legislation banning transgender athletes from participating in school sports.

Kelly said Wednesday that Kansans voted “for civility, for cooperation, for listening to one another, and for a spirit of bipartisan problem-solving that’s become all too rare in our politics today.”

Kelly led Schmidt by 1.5 percentage points with a total of 479,875 votes to Schmidt’s 465,620. Independent state Sen. Dennis Pyle, a conservative candidate who challenged Schmidt’s Republican bonafides, appeared to be a decisive factor in the race by claiming 19,753 votes. Libertarian Seth Cordell received 10,659 votes.

Schmidt — who joined a lawsuit challenging the 2020 presidential election results, labeled Kelly a socialist, promoted lies about a drag show, and complained relentlessly about inflation and crime — said Wednesday he was disappointed by “the concerning tendency of modern political discourse to veer away from discussing the great public issues we must solve together.”

He referenced the outmigration of the Kansas population, management of “our previous water resource” and the need to repair “archaic structures” — none of which were prominent talking points for his campaign.

“I will continue to be among those who want to make our state better, despite the gravitational pull of modern politics and mass communication having largely obscured so much of that discussion,” Schmidt said.

Pyle said his campaign sent a message to the Republican Party that Kansans needed a strong conservative candidate. He said the assumption that his votes would have gone to Schmidt is false.

“The GOP could have done better,” Pyle said. “All said, Schmidt got the anti-Kelly vote, period. The left-wing endorsements for Kelly gave her the win. Or, there was an issue with the voting machines?”

Bryan Caskey, the state elections director, said there were 29,000 mail-in ballots that hadn’t yet been returned, but “not all of those are going to come in.”

Kansas law requires mail-in ballots to be counted if they are postmarked by Tuesday and received within three business days. Because Friday is a holiday, ballots will be accepted through Monday.

Caskey said there were about 1,000 ballots remaining to be hand counted in each of Ford, Montgomery and Saline counties. He cited mechanical problems, such as a machine unable to scan mail-in ballots with a creased fold, for the need to count by hand.

If the margin between Kelly and Schmidt were to tighten within a half a percentage point, either candidate could request a state-funded recount. Any of the four candidates on the ballot also could pay for a recount and dictate which areas would be recounted and whether the recount would have to be done by hand.

In a speech to supporters late Tuesday, Kelly said Kansans value character and hard work over political party or ideology.

“Kansans want to know who you’ll work with, not who you’ll work against,” Kelly said. “Kansans embrace a proud tradition of neighbor helping neighbor in their own lives, and they expect their elected officials to carry that same spirit in their service to the state. I believe we have done that.”

In her victory statement Wednesday, Kelly thanked Schmidt for his service to the state. Schmidt was a state senator for 10 years and attorney general for the past 12 years.

“We had strong, healthy disagreements on the issues, but I do believe he cares about this state, and that we stand united in our commitment to Kansas and its future success,” Kelly said.

This developing story will be updated.