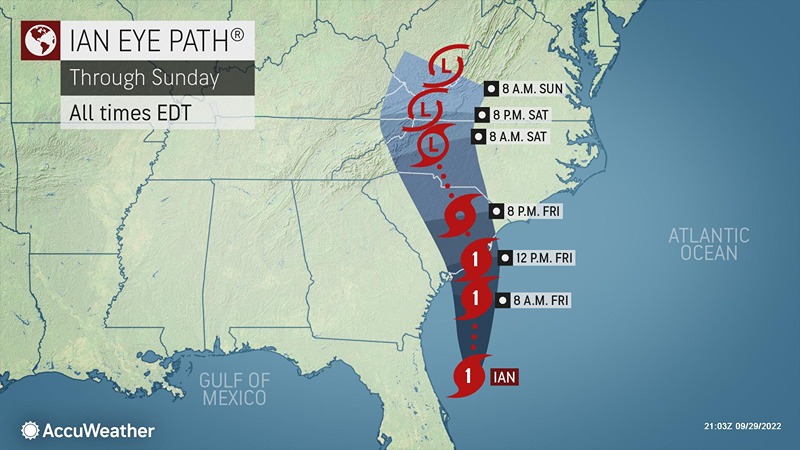 Ian has moved on from Florida and is now headed up the East Coast. Destructive winds and flooding rain will continue to spread north through the Carolinas into Virginia Friday morning with the risk for tornadoes during the day. Because of the impacts of flooding, rainfall, tornadoes, destructive winds, and catastrophic storm surge across Florida, Ian is a 5 on the AccuWeather RealImpactTM Scale for hurricanes.

Ian strengthened once again over the warm waters off the Southeast coast and has once again become a hurricane as it moves towards South Carolina. A dangerous storm surge is expected along the northeastern Florida coast and points northward through South Carolina.

Ian will spread winds into Georgia and the Carolinas Friday and Saturday. A narrow corridor with wind gusts of 80 -100 mph will be near the landfall point. The wind is expected to bring down trees and cause scattered power outages. Power outages will have the potential to last for weeks.

Ian will dump up to 4 inches of rain into the eastern United States over the next several days. Up to 8 inches of rainfall is expected across portions of the southern Appalachians and along the southeastern U.S. coast where areas of flooding will be possible. The highest rainfall totals are expected in coastal South Carolina near where Ian is expected to make its third landfall.

Businesses along Ian’s storm path will need to keep a close eye on this storm as it approaches and should:

Hurricanes are not just a problem along the coast; they can also impact businesses several hundred miles inland. Don’t wait for an imminent hurricane or tropical storm to prepare your business for one. The message is clear: Start planning now. AccuWeather for business has several tools to help you prepare for tropical storms and hurricanes.