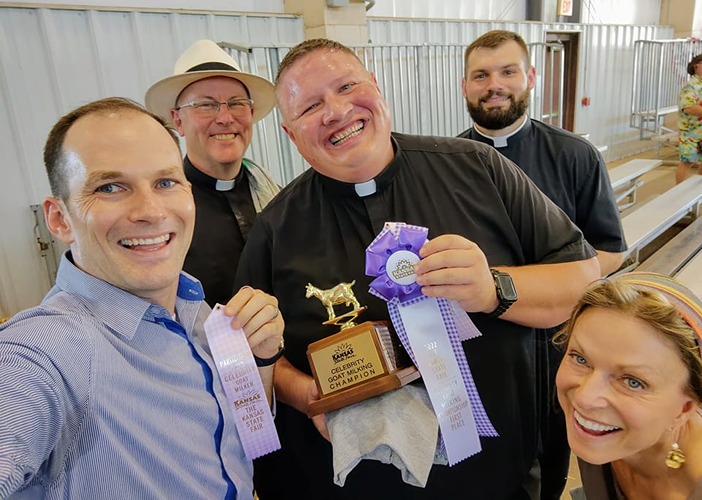 HUTCHINSON, Kan. – Hutchinson’s goat milking priests retain their title as the goat milking champion of the known world – or this part of it anyway.

The Catholic Diocese of Wichita, including priests from Holy Cross, St Teresa’s, and Our Lady of Guadalupe Catholic Churches, held off some strong challenges in the early rounds before out milking the Hutchinson Fire Department in the finals of the Kansas State Fair Celebrity Goat Milking Contest. Friday afternoon.

Team leader Father Aaron Spexarth told Ad Astra News it feels good to win again. “It was a little nervous coming in,” he said. “The target was on our back this year, but it was nice to come out and get the victory once again.”

The priests had to get through by far the toughest side of the bracket to make the final. The group beat an Army Reserve team in the first round, whose output would have won either heat on the other side of the bracket, and Wichita Mayor Brandon Whipple’s team, which had the top first-round output, in the semifinals.

Hutch Fire held off the State Fair Board before out milking the Kansas Highway Patrol in the semifinal. Firefighter Andrew Pauly from Station 6 said they pickled a “milk dud” for the final round, but they milked it for all it was worth.