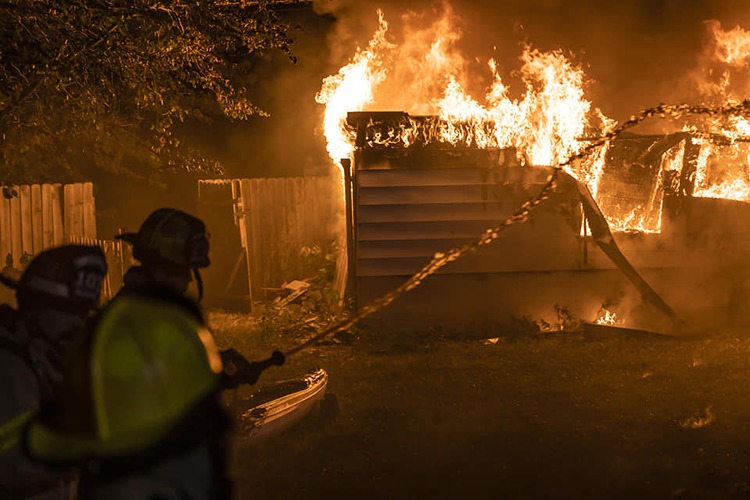 HUTCHINSON – Sparks from a piece of farm machinery is being blamed for a Thursday afternoon fire that burned about 80 acres in southeast Reno County and forced closure of a five-mile segment of K-14 highway.

According to Reno County Emergency Management, Reno-Kingman Joint Fire District 1 was called out about 1:30 p.m. to the area of K-14 and Pleasant Valley Road. The fire got into trees and jumped K-14, which promoted closure of the highway.

A task force was activated along with mutual aid to assist in putting the fire out, which ultimately involved four other fire districts along with Hutchinson and South Hutchinson Fire Departments. The fire was brought under control around 4 p.m.

Some residential structures were threatened by the fire, but none were damaged.

In addition to the grass fire along K-14, Hutchinson Fire Crews also responded to three other fires Thursday.

Just before 2:30 p.m. they were dispatched to the Arkansas River Bridge on 4th Avenue where a fire was burning along the river in heavy vegetation, and about two hours later they responded to the 3500 block of West 9th where multiple brush piles and debris were on fire. That fire spread through multiple yards in that area. Both fires were contained quickly but an extensive overhaul was required.

At 9:26 p.m. a garage fire was reported in the 900 block of East 7th. The garage was fully involved when fire units arrived.

Multiple power lines were reported down and were arching due to the intense fire conditions. Those lines also fell on wooden and metal fences that appeared to be charged by the lines.

The Red Cross was also brought in as many homes were without power as a result.

All three fires remain under investigation.