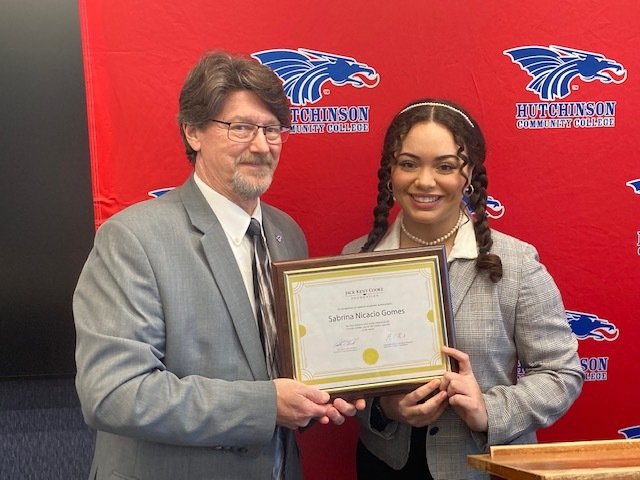 HUTCHINSON
– One of the largest scholarships given to community college students to continue their studies has been awarded to a recent Hutchinson Community College graduate. Sabina Nicanio-Gomes, who earned an associate of science degree in pre-engineering and an associate of arts degree for her involvement in dance programs, was introduced Monday as one of 100 Jack Kent Cooke Foundation scholarship recipients, selected out of over 1,200 applicants.


The Cooke Foundation scholarships provide up to $$55,000 per year for students selected based on a combination of high academic performance and financial need. In addition, Cooke Scholars will receive comprehensive educational advising them through the process of transferring to a four-year college and preparing for their careers.


During a ceremony at the college Nicanio-Gomes announced she will be attending Princeton University in the fall, majoring in aerospace engineering. She said her goal is to earn her doctorate degree and start her own space company.


﻿
This summer Nicanio-Gomes will be at Stanford University where she will be part of a research team working with NASA on artificial intelligence for lunar rovers.


During Monday’s presentation ceremony at the Parker Student Union, Nicancio-Gomes thanked her processors at HutchCC and everyone else who helped her through this part of her educational journey.


She decided to attend Princeton based in part on a very strong aerospace engineering program and in part because on top of the Cooke Foundation Scholarship they also awarded her a full-ride scholarship. Her acceptance to the Ivy League college is also rather unique in a couple of ways.


Princeton has a very small transfer program, which was re-instituted in 2018. “They’ve been taking between 10-15 transfer students a year,” Nicanio-Gomes said, adding she is honored to be part of that group.


Additionally, she will enter Princeton as a sophomore, which is a major feat in and of itself. Normally transfer students come into that university with a freshman standing. “They said to me in a Zoom meeting you have to have really blown them away to be admitted other than as a freshman, and the Dean of Engineering was really impressed with me,” Nicancio-Gomes explained.


Nicacio-Gomes, who is from Brazil, came to Kansas for her senior year at St. John High School, completing her high school studies in 2 ½ years.


She and Hutchinson Community College President Dr. Carter File both expressed their appreciation of Dr. Ryan Diehl, who helps lead the college’s honors program and is Phi Theta Kappa sponsor, and who worked closely together along with other faculty members in the application process.

Ex-Teacher in Wichita Pleads Guilty to Sex with Student