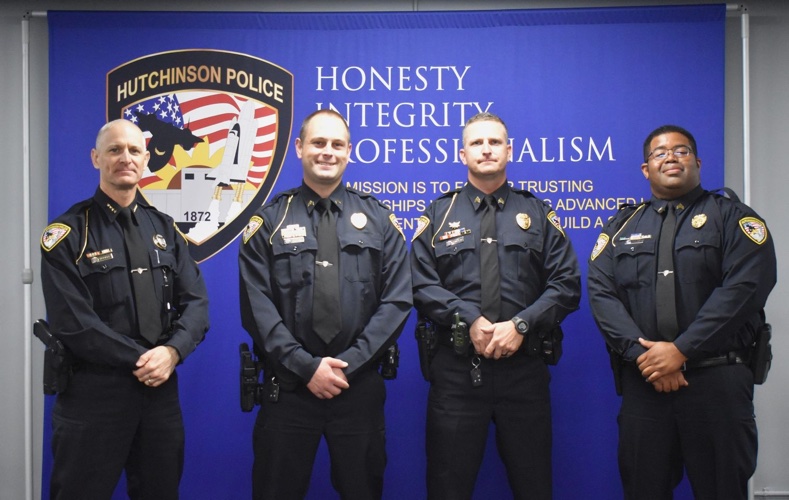 HUTCHINSON – On Friday, June 17, 2022, the Hutchinson Police Department promoted the following officers to the rank of Sergeant: James Sanders, Cory Schmidt and Wesley Vaughn. Their bios have been posted below.

Sergeant Schmidt graduated from Friends University with a Bachelor of Arts in Criminal Justice with a minor in Psychology and Pre-Law. He began his Career in Law Enforcement with the Hutchinson Police Department in 2015. Since then, he has served as a Field Training Officer, an instructor for numerous classes, a Sniper on the Emergency Response Team, a Master Police Officer, and a K9 Officer with K9 Nika.

Sergeant Vaughn was born and raised in Sterling, Kansas. He attended college at the University of Michigan before returning home to Kansas to pursue a career in law enforcement. Sergeant Vaughn served at the Reno County Sheriff’s Office for 15 years before transitioning and serving with HPD for the last three years. Sergeant Vaughn was awarded the title of Master Police Officer earlier this year, and continues to strive for excellence in his roles as a Field Training Officer, Outlaw Motorcycle Gang Investigator, and a Crisis Negotiator.