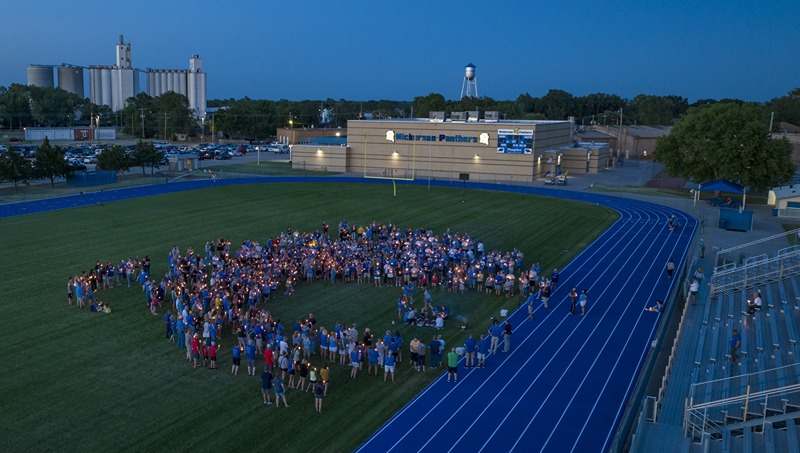 NICKERSON – Countless hundreds of people gathered at Nickerson High School’s football and track facility Sunday night for a candlelight vigil in support of the Trey and Amy Jones Family. Trey Jones, a teacher and head track coach at Nickerson High School, died Thursday at a Louisville, Kentucky hospital from injuries sustained last Tuesday evening when a drug intoxicated driver struck him, Amy, daughter Ava and son Creek on a sidewalk in downtown Louisville.

USD 309 Superintendent of Schools Curtis Nightengale told Ad Astra News prior to the vigil that the support for the family is what you’d expect from a close-knit community. “It’s just really amazing, just the outpouring of phone calls and messages, Facebook posts, the fundraising,” Nightengale said. “Every box has been checked  in terms of what this community has done.”

During the vigil, Nickerson High principal Rick Blosser said Trey died a hero. “I believe he saved his family on that sidewalk last Tuesday night,” Blosser said. “In his death, he is saving the lives of many more.”

Early Monday morning, Trey was celebrated for being an organ donor with an honor walk at the University of Louisville Medical Center. Blosser said this included hospital staff and family and friends who lined the hallways between his hospital room and the operating room, where Creek and older son Hunter followed behind and said their final goodbyes.

His gift is expected to give life to more than nine people.

Blosser added he can’t get his head wrapped around all that has happened, but he believes in a higher power that can give us strength. He said it’s going to take all of us to lift the family up and hold on to them at a time when they can’t stand on their own.

The vigil included singing and time for people to write notes to Trey, which were placed in two burning cans with the smoke taking those messages to him.

There was also an update provided on the condition of Amy Jones, assistant superintendent of USD 309, and Ava, who will be a senior at Nickerson in the fall. In the past 24 hours, Ava has opened her eyes and wiggled her toes on command, and is improving every day. Both are reported in stable condition.

Creek Jones was released from another Louisville hospital the day after the accident.