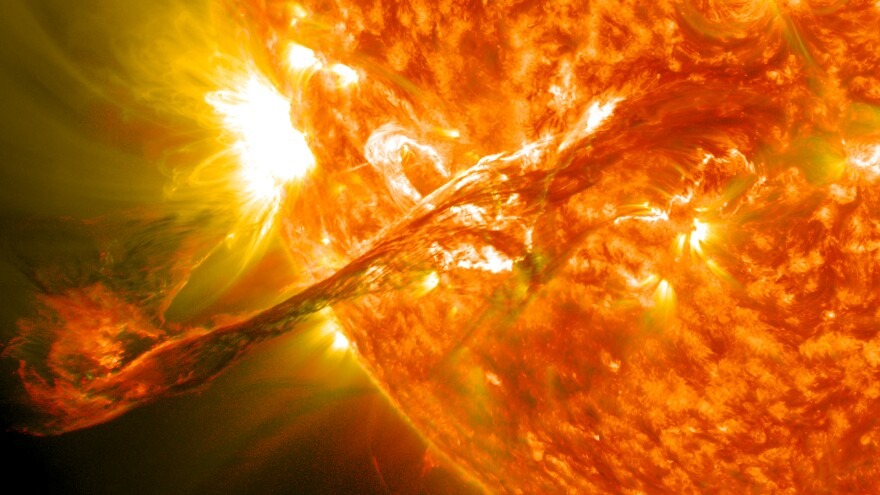 This 2012 image from NASA shows an example of a coronal mass ejection, which can release billions of tons of material from the sun's atmosphere into space and carry its own magnetic field. (Photo from NASA/GSFC/SDO)

HAYS, Kan. (HPPR/KNS) — Kansas farmers battered by drought and heat now have more weather to worry about — in outer space.

An expected surge in solar flares over the next several years will likely send massive bursts of radiation hurtling toward our atmosphere. And that would threaten satellite signals.

That matters to farmers because much of the technology that has made modern farms increasingly efficient relies on those satellites, particularly global positioning systems, or GPS.

So even just a short time without GPS could come with a steep cost(link is external) for Midwestern farmers.

“It could be, easily, a billion-dollar loss of efficiency even for two days,” Kansas State University agricultural economist Terry Griffin said. “The likelihood of that occurring is fairly good enough to where really smart people are concerned about it.”

A new study(link is external) from Griffin and a team of other researchers from institutions such as the National Oceanic and Atmospheric Administration’s Space Weather Prediction Center came up with that $1 billion figure based on a potential widespread GPS outage that would hit farming at a critical time — such as corn planting season in the spring — across the Midwest.

On a smaller scale, solar energy from 90 million miles away already degrades satellite signals(link is external) on a regular basis.

Weston McCary, technology projects coordinator for the Kansas Water Office based in Colby, Kansas, said he has commonly seen solar radiation disable satellites for 20 minutes to an hour.

“These systems are vulnerable to this solar activity,” McCary said. “It’s not if. It’s when.”

A geomagnetic storm in our atmosphere caused by a solar flare took out 40 Starlink satellites(link is external) earlier this year. Increased solar activity this summer has sped the downfall(link is external) of some European Space Agency satellites.

And as scientists expect solar activity to ramp up in the coming years, those outages could become longer and more frequent. 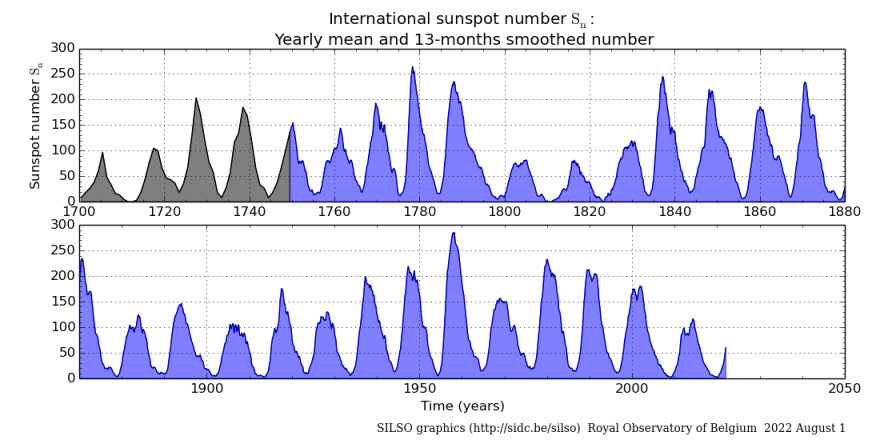 This graph illustrates the historical cycles of solar activity as the number of sunspots has increased and decreased over hundreds of years. (Photo from Royal Observatory of Belgium)

Staring at the Sun

So why are experts worried about space weather impacting farm technology now? Timing.

Centuries of astronomical records show that solar flares happen in a cyclical pattern, with the intensity and frequency peaking roughly every 11 years.

Solar activity is now ramping up toward its next peak. And the current solar cycle is already looking more intense(link is external) than the previous 11-year period.

The other piece of timing that concerns experts is how much more GPS has been integrated into the lives of farmers — and people in general — since the last time solar activity peaked several years ago.

“It could be, easily, a billion-dollar loss of efficiency.”

More than two-thirds of Kansas grain farms now use GPS to steer their tractors. That helps farmers plant expensive seed in exact rows without unintentionally overlapping them.

About half of farms use GPS to map their harvest yields, which gives them valuable data about what they should plant in future seasons. Another quarter of farms use GPS mapping to pinpoint the amount of fertilizer they apply to each part of their land.

And the loss of those efficient practices multiplied across hundreds of thousands(link is external) of Midwestern farms would quickly add up.

“When you’re looking at how much money goes into an ag operation on a daily basis,” McCary said, “when the wheels stop turning, things get expensive real fast.”

But the more integrated technology becomes with farming, the more the sudden loss of that technology would hurt.

“Could it still be done manually? Absolutely,” McCary said. “Would it be as efficient? No. Would it cost us some money as an economy of scale? Absolutely.”

Agriculture wouldn’t be the only part of life impacted by this type of celestial event. If GPS goes down on the farm, chances are it’ll go down in people’s cars too. It could even potentially disable cell phones and power grids(link is external).

And satellites’ impact on the farm goes well beyond GPS-guided tractors.

The U.S. agriculture industry relies on the overhead photos they take of cropland to assess the impact of insects and drought. Ranchers can use collars(link is external) fitted with transmitters and sensors to track their livestock’s movements. Some farmers in remote areas without broadband depend on satellites for their internet connection.

“When you’re looking at how much money goes into an ag operation on a daily basis … when the wheels stop turning, things get expensive real fast.”

But even in a worst-case scenario where farmers lose access to GPS for a long period, McCary said, it doesn’t mean agriculture would automatically go back to the stone age.

He’s optimistic that farmers could fall back on ground-based radio positioning technology(link is external) they used a couple of decades ago. Or just eyeball it.

“That’s how we’ve been planting corn for the better part of 100 years,” McCary said. “So the average farmer, especially the older gentlemen … they would have no problem getting right back out there.”

But the reality is that a lot of people — not just farmers — aren’t even aware of the possibility of a cosmic event disrupting the technology they’ve grown to depend on.

Griffin, the K-State farm economist, has traveled the state talking with farmers about this issue for more than a decade. He said most folks are hearing about it for the first time. But farmers have been receptive when he presents the science, he said, so there’s some momentum for building awareness.

The first step for farmers, Griffin said, is to figure out how they could keep their operation running temporarily without GPS so they aren’t caught off guard. Maybe talk with their financial advisors and equipment dealers to discuss back-up options.

It’s like keeping a spare tire and jack in the back of your car. Even if you don’t anticipate getting a flat tire each time you go for a drive, you know it’ll happen eventually. And when it does, you want to be ready.

“We cannot control solar activity as humans,” Griffin said. “But what we can do is try to make a plan.”