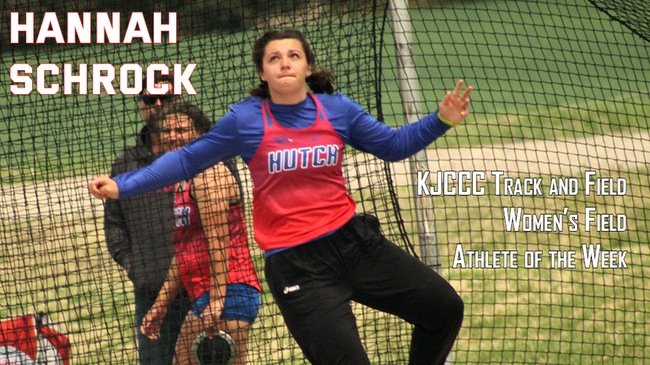 was named the Jayhawk Conference’s Women’s Field Athlete of the Week on Tuesday.

Schrock had a huge day on Saturday at the Butler Invitational. Her day included two national championship qualifications and three personal records.

Schrock, a native of Hutchinson, started her day with a fourth-place finish in the hammer throw with a national-qualifying and personal-record throw of 142-feet, 1 inches. That throw ranks No. 11 in Blue Dragon history.

Schrock finished off her huge day with a second-place finish in the shot put with a national-qualifying and career-best mark of 36 feet, 3 inches.

Schrock is the first Blue Dragon women’s athlete and the third overall Blue Dragon athlete to earn KJCCC Weekly track and field honors. Men’s thrower Antonio Cooper has twice won the men’s Field Athlete of the Week award this season, once indoor and once outdoor.