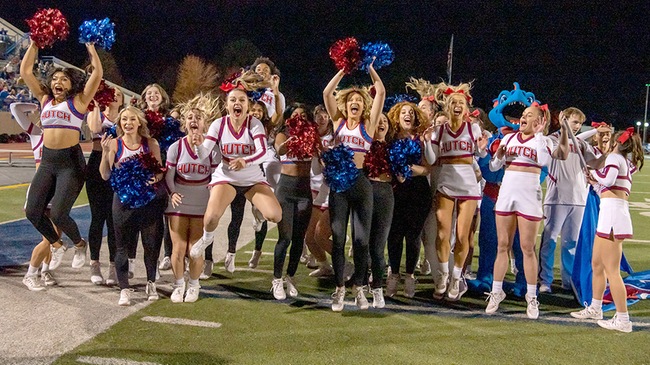 HUTCHINSON, Kan. – After their Homecoming performance during Saturday’s night Blue Dragon-Highland football game, there was a little surprise in store for the Hutchinson Community College Cheer Squad and Dragon Dolls Dance Team.

The surprise came as a message on the DragonVision videoboard after their performance from none other than Monica Aldama, the Navarro College cheer squad head coach, who along with her team, have become a nationwide sensation on the NetFlix documentary series “Cheer.”

“I’m excited to announce your time has finally come. The (Blue Dragon) Spirit Squad is headed to NCA College Nationals,” Aldama told the Blue Dragon cheer squad on the video.

The Blue Dragon Spirit Squad will compete at the National Cheerleaders Association College Nationals on April 5-9 in Daytona Beach, Florida.

This will be the cheer squad’s first appearance for the competition since 2008. The dance team will be making its nationals debut in 2023.

“Hutch Cheer hasn’t competed at NCA since the early 2000s so we are excited to put Hutch back on the map,” second-year Blue Dragon Spirit Squad head coach Sami Bell said. “The dance team will be making their debut in Daytona as well so this will be a game changer for the program as a whole.

“Our idea of being a great program is to compete at our highest level amongst the best of the best. We are excited to do that and see what we are truly capable of.”

A former Blue Dragon cheerleader in 2014-15 and 2015-16 from Midlothian, Texas, Bell has brought great energy to the program. She was hired as the program’s assistant coach in 2020-21 and was named head coach one season later.

“Attending NCA College Nationals is a huge goal for our programs,” Bell said. “The Spirit Squad wouldn’t be able to reach this goal and participate if it wasn’t for the support of Blue Dragon Athletics and our community.”

HHS and HCC Team Up for Annual Empty Bowls Fundraiser