By Kansas Association of School Boards

TOPEKA, Kan. – Enrollment in both public and accredited private schools increased this year in Kansas. The number of students with disabilities reached an all-time high. Students qualifying for free or reduced-price meals increased as schools began requiring families to apply after two years when all students could eat free in response to the COVID pandemic.

According to the Kansas State Department of Education, public school enrollment on the Sept. 20 “count date” was 484,060 this year, an increase of 4,317 or 0.9 percent from last year. Accredited private school enrollment increased 125, or 0.5 percent, to 26,470. These numbers do not count students in preschool programs not funded by the state. Unaccredited private schools, including home schools, are not required to report enrollment data to the state, so the number of students in these schools is not available.

Public school enrollment was generally stable at around 460,000 students from 1994 to 2007. Enrollment then increased to about 492,000 in 2014, where it again remained stable through 2020, the first year of the COVID-19 pandemic. The next school year, 2020-21, public school districts had nearly 16,000 fewer students when school opened amid various pandemic responses. Last year, enrollment increased by 3,278. With this year’s increase, schools remain about 8,000 students below the pre-pandemic high, but higher than any year before 2013.

Over the past three decades, Kansas public schools have become far more racially diverse. The number of white students has declined by almost 82,000 and African Americans by almost 4,000. Hispanic students have increased from 22,000 to over 100,000, meaning about one in five Kansas students is Hispanic. All other groups, which include American Indians, Asians and students who identify as multi-ethnic, increased by 44,000. Data on multi-ethnic students has only been recorded since 2003, and this number has increased from about 7,000 to nearly 30,000. 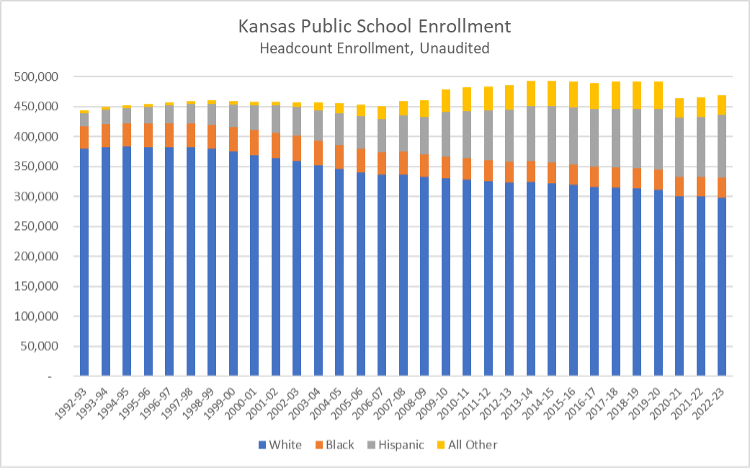 Accredited private school enrollment peaked at almost 32,000 students two decades ago in 2001 then dropped steadily to 26,449 in 2020 and declined 2.5 percent in the first year after COVID. Private schools regained most of that decline in 2022, and with this year’s increase have slightly exceeded their pre-pandemic level in 2020 – but remain lower than other years prior to 2020. 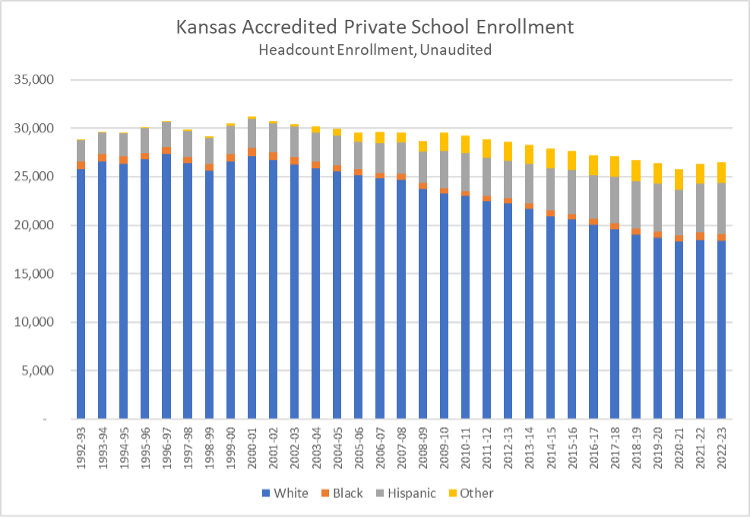 For the past two years, all children have been able to eat breakfast and lunch at school for free, without filling out an application reporting income. Although school districts asked parents to fill out a voluntary income form (because free lunch numbers are used to calculate funding for various school district programs), it was expected that some parents would not do so. 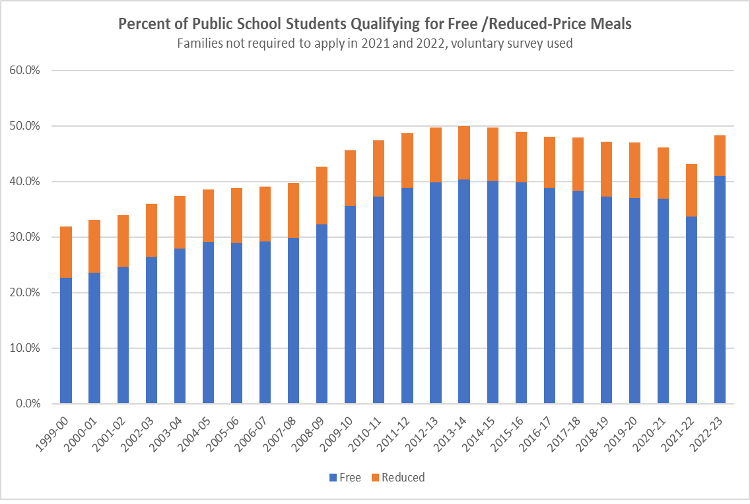 The percentage of students reported as qualifying for meal support did drop, especially last year when it fell to 43 percent of public school students, the lowest level since 2009. When families had to again fill out forms to qualify this year, the percentage rose to over 47 percent.

Private schools also participate in the National Student Lunch Program, and showed a similar pattern, although private schools have a much lower percentage of low-income students. After remaining fairly stable at around 18-19 percent since 2014, students reported as qualifying dropped to 17.9 percent in 2022 – the lowest level in ten years. This year, when families had to fill out applications again, the percentage rose to over 20 percent – the highest level ever for private schools. 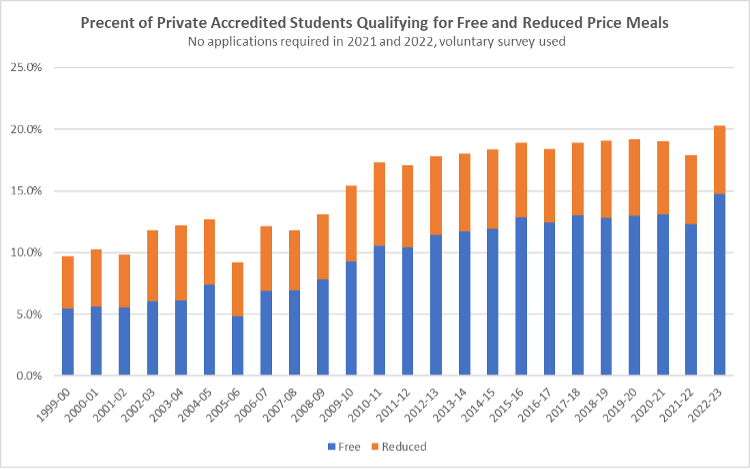 Although overall enrollment and students eligible for free and reduced-price meals declined during the pandemic, the number of students with disabilities has continued to increase, reaching nearly 80,000 students in public schools this year, an increase of 22 percent since 2013. This increase this year alone was 3,000 students. Students with disabilities now make up 16.4 percent of total enrollment. (This does not include over 10,000 students identified and served in gifted programs.) 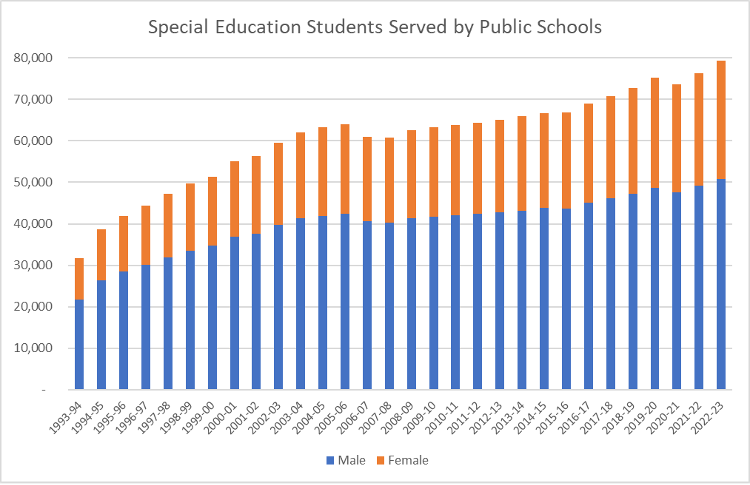 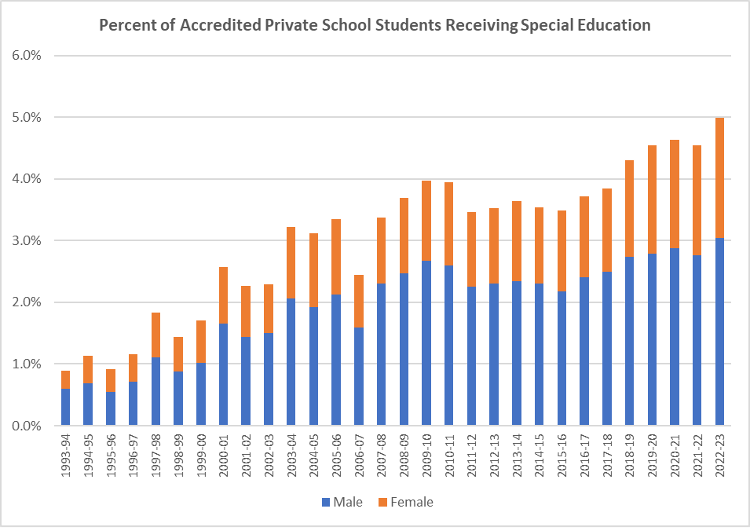 Kansas, like all states, had a large decline in public school enrollment in 2021 following the COVID pandemic, raising questions about whether those students were permanently leaving public education for alternatives.

Since then, about half of that enrollment loss has been regained. Accredited private schools also lost enrollment in 2021. Enrollment in those schools is now just 21 students more than in 2020, indicating they have regained their loss but have not taken a large share of public school students. Some of those students may be in non-accredited private schools, including home schools, but those institutions do not report enrollment.

Public school funding is tied to enrollment, but it is complicated. Under the school finance formula, base state aid per pupil – the amount districts receive for each student – is based on enrollment from the previous or second previous year, whichever is higher. That means the increase in headcount enrollment this year will not affect school district budgets. However, beginning this year, base state aid is supposed to be indexed to the average increase in the Midwest Consumer Price Index over the previous three years.

However, student weightings, which give districts extra funding for certain students and programs with demonstrated additional costs, are based on current-year enrollment.

The largest weighting program is for at-risk programs to assist students who are having academic difficulties. This program is based on the number of free lunch-eligible students in each district. As a result, funding for these programs declined last year when fewer students filled out applications for free meals, and should increase this year based on the rise in qualifying students.

New estimates of the cost of base state aid, weightings, special education aid and other school funding programs are expected to be released later in November.