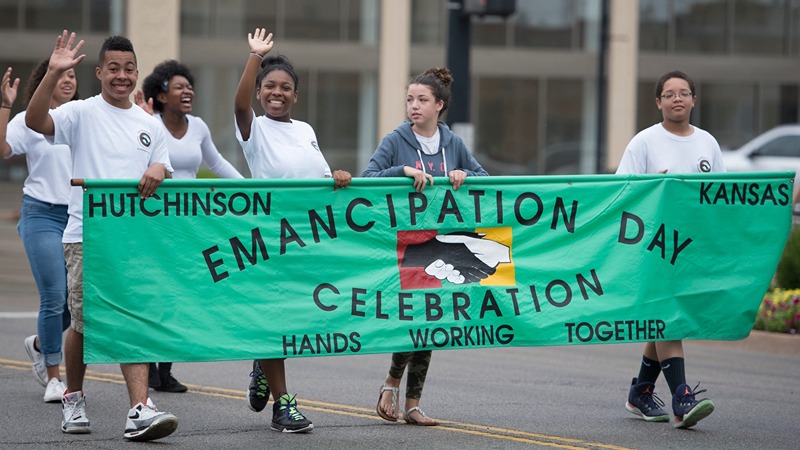 HUTCHINSON – One of the oldest traditions in Hutchinson, Annual Emancipation Day activities happen this weekend.

The celebration marks the anniversary of the Emancipation Proclamation, which declared “that all persons held as slaves” within the rebellious states “are, and henceforward shall be free.”

A biographical plaque of Kansas civil rights icon Chester I Lewis, who was born and raised in Hutchinson, will be dedicated at 6 PM Friday at Chester I Lewis Plaza across from the Fox Theater on East 1st in Downtown Hutchinson.

Friday has been proclaimed Chester I Lewis day in Hutchinson, and Vice Mayor Jon Richardson will be reading a proclamation during the dedication, which is co-sponsored by the City of Hutchinson, Hutchinson Community College Social Science Department, and Hutch in Harmony.

Other Friday evening events include a three-point shootout at 6 PM Washington between Avenue A and B, Jazz in the Park from 8-10 at Avenue A Park featuring the Kansas Big Band, and a teen dance from 8-10 in the Encampment Building at the Fairgrounds.

Saturday events begin with the parade at 10 AM on Main Street from Avenue B to 12th. GlindaTheus, a long-time Hutchinson educator, is the grand marshal for the parade, and will also be speaking at the picnic that begins at noon at the Hutchinson Community College Stringer Fine Arts Center. Saturday evening there will be a dance from 9-1 in the Encampment Building at the Kansas State Fairgrounds. Admission will be charged for the dance, the only event of the weekend for which there is a charge.

Emancipation weekend events conclude Sunday with their annual Gospel Fest at 3 at the Stringer Fine Arts Center, with an ice cream social to follow.

Stage 9 Presents ‘The Real Inspector Hound’ this Weekend and Next