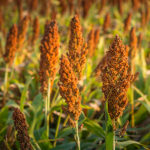 The Chairmen of National Sorghum Producers says historic drought in the Central Plains caused the lowest yields since hybridization for the crop.

Clint Meeker farms in South-Central Kansas. “That’s a testament to how difficult the growing conditions were in the Sorghum Belt.”

During the 2022 National Association of Farm Broadcasting, he told Brownfield the industry needs to evaluate drought-tolerant hybrids. “(So we) can move genetics forward.  I think that’s a great opportunity to look at what did have success in a drought and move forward with some of those lines.”