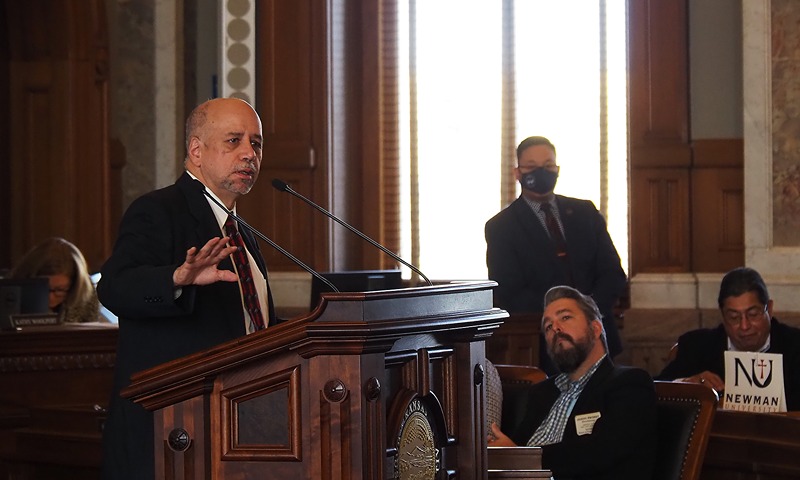 House Minority Leader Tom Sawyer, a Democrat from Wichita, said Tuesday he wouldn’t seek reappointment to the job during the 2023 legislative session, saying it was time for a new generation of Democrats to lead. (Sherman Smith/Kansas Reflector)

The announcement that Sawyer would step aside but remain in the House followed decisions by House Speaker Ron Ryckman and House Speaker Pro Tem Blaine Finch, both Republicans, not to seek reelection in 2022. House Majority Leader Dan Hawkins, who was reelected, is expected to be chosen by peers to serve as House speaker for the two-year legislative cycle.

“Upon deep reflection, I believe it is time for me to step back and allow the caucus to have a new leader who will lead us and Kansans towards achieving these important goals,” Sawyer said. “It has been an honor of a lifetime to be entrusted with the responsibility to lead our caucus over the many years.”

Voting in the August primary and November general election left House Republicans with a two-thirds majority important when considering vetoes of Democratic Gov. Laura Kelly. Democrats gained one seat to bring the caucus to 40 in the 125-member House. Democrats fell two seats short of breaking the GOP supermajority and offer more assistance to Kelly during her second term.

Sawyer, who ran for governor in 1998 and served four years as chairman of the Kansas Democratic Part, said he expected Democrats to expand their numbers in the House.

“This growth, which I hope to see continue in the coming years, will strengthen our position to advocate strongly for the issues that matter most to Kansans, such as tax relief, expanding Medicaid, fully funding public education including special education and legalizing medicinal marijuana,” he said.

Hawkins, who has served in the House since 2013, outlined in a letter to House Republicans a critique of the governor. He said Kelly botched handling of the COVID-19 pandemic, allowed crime and inflation to rise and made anti-abortion policy an “afterthought.”

Individuals elected in November to serve in the 2023 Legislature will vote Dec. 5 on nominees for House speaker, House majority leader and House speaker pro tem as well as the top Democratic posts in the chamber.