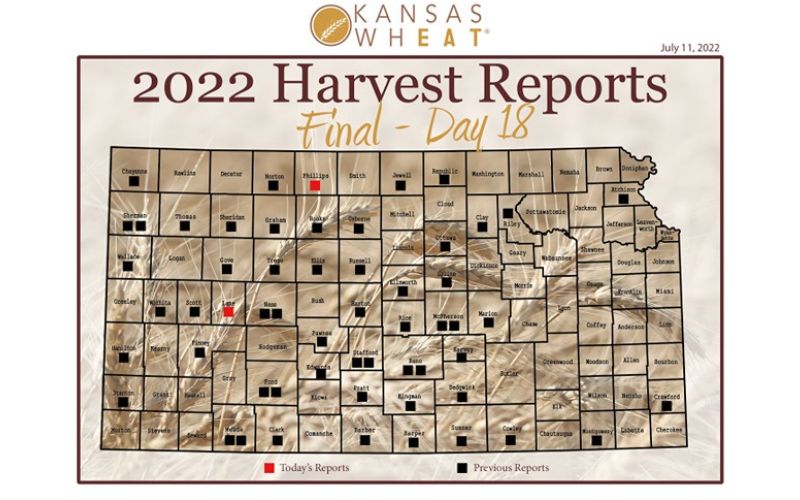 By Julia Debes
This is day 18 of the Kansas Wheat Harvest Reports, brought to you by the Kansas Wheat Commission, Kansas Association of Wheat Growers and the Kansas Grain and Feed Association.
Combines are cutting the last few fields in north central Kansas as producers put their final touches on the 2022 Kansas wheat harvest and turn their attention to other fieldwork. In the weekly Crop Progress and Condition report, USDA National Agricultural Statistics Service noted 95 percent of the wheat crop has been harvested as of July 10, ahead of 82 percent last year and 86 percent for the five-year average.
Ron Suppes, who farms across Lane, Scott and Finney counties, reported he had a good harvest. His average across farms was 37 bushels per acre. Test weights stayed heavy at 62 pounds per bushel or better on everything, moisture stayed steady at 10.5 to 12.5 percent and protein was excellent at 13.2 to 14.7 percent.
“The wheat was really nice,” Suppes said. “We had more than we should have, but not as much as we wanted.”
With a lack of moisture, kernel count was well below normal at 26 to 28 kernels per head. From the time Suppes planted fields to harvest, the most moisture on a field was six inches and the least was 4.5 inches. Most of that rain came in bits and pieces of .30 to .40 of an inch, which did not help the wheat much, but cool weather before harvest was conducive to filling kernels.
Suppes plants all his winter wheat fields to hard white winter wheat. This year he planted two varieties — Kansas Wheat Alliance’s Joe and KS Silverado. He noted performance was neck-and-neck with the two varieties from field to field, although he estimated Joe yielded a few more bushels overall and KS Silverado is expected to have slightly better baking quality.
In north central Kansas, harvest is very near the end in Phillips County after eight days of rain delay over two weeks, according to Bruce Williams with Trinity Ag LLC in Smith Center. He reported the wheat was a little better than expected, hitting projections, but with wide variations due to crop rotations.
Wheat following summer fallow yielded the best at 67 to 85 bushels per acre, although Williams noted that there are not many summer fallow acres up in the area. Wheat following corn or continuous wheat took a bigger hit at 37 to 45 bushels per acre and wheat following soybeans only yielded 20 to 25 bushels per acre.
Test weights started the harvest season strong at 60 to 61 pounds per bushel as folks were cutting their better wheat, but the average has now dropped to 57 to 58 pounds per bushel as producers pick up their remaining fields. Rain during harvest was just enough to shut down the combines, but not enough to impact test weights.
Protein is averaging 11.7 to 12.5 percent with some fields higher and some fields lower. Williams reported a few loads of light smut showing up, but the disease pressure did not even affect entire fields, so he was not concerned.
Overall, some fields looked pretty tough, which is why Williams said area producers are happy with what they are cutting. With wheat acres down the last two years in favor of other crops, folks are turning their attention to other fieldwork — burndowns on wheat stubble, last-minute spraying on corn and getting another hay crop swathed and baled. Wheat harvest may be nearly over, but the work will continue.
The 2022 Harvest Report is brought to you by the Kansas Wheat Commission, Kansas Association of Wheat Growers and the Kansas Grain and Feed Association. To follow along with harvest updates on Twitter, use #wheatharvest22. Tag us at @kansaswheat on Facebook, Instagram and Twitter to share your harvest story and photos.