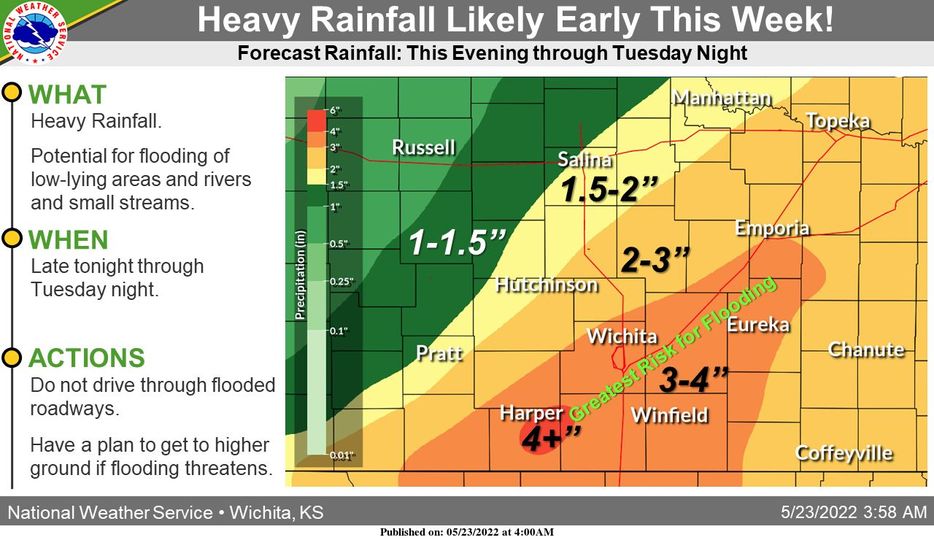 A slow-moving system will bring rainfall to the region Monday through Wednesday with moderate to heavy rain expected Monday evening through Tuesday evening. Rainfall accumulations will range from a half inch in north central Kansas to possibly four inches in south central Kansas. Localized flooding is possible especially in the Flint Hills into southeast Kansas.

A flood watch has been issued for portions of central, south central, and southeast Kansas from 12 a.m. Tuesday until 12 a.m. Wednesday. Flooding caused by excessive rainfall continues to be possible. Learn more

Monday Night
A chance of showers, then showers and possibly a thunderstorm after 7pm. Some of the storms could produce heavy rain. Low around 52. East northeast wind 8 to 11 mph. Chance of precipitation is 100%.


Tuesday
Showers and possibly a thunderstorm. Some of the storms could produce heavy rain. High near 58. Northeast wind 11 to 14 mph, with gusts as high as 18 mph. Chance of precipitation is 100%.


Tuesday Night
A 40 percent chance of showers and thunderstorms, mainly before 1am. Some of the storms could produce heavy rain. Cloudy, with a low around 48. North wind 11 to 13 mph.


Wednesday Night
Mostly cloudy, with a low around 47.


Thursday
Sunny, with a high near 77.


Thursday Night
Mostly clear, with a low around 54.

Friday
Sunny, with a high near 86.

City of McPherson Set to Spray for Mosquitos Wednesday