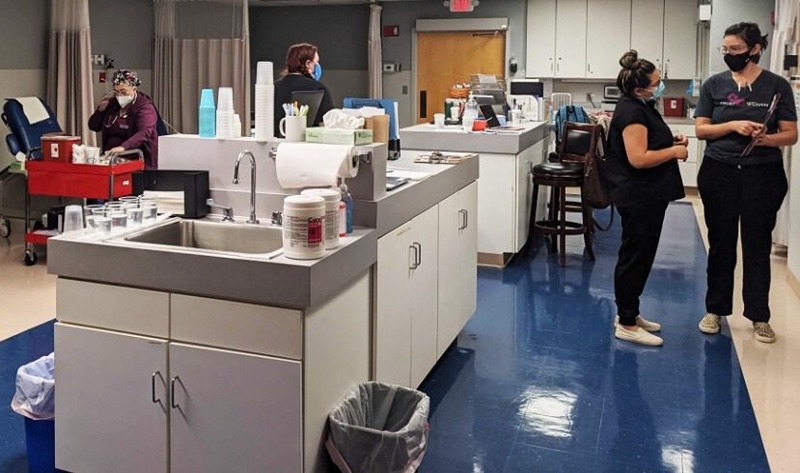 LAWRENCE, Kansas — Even as an abortion refuge in a region where a growing number of states impose ever-tightening restrictions, and outright bans, on the procedure, another wave of women coming to Kansas for treatment has yet to materialize.

Operators of clinics offering abortion in Kansas say Midwestern and Southern states where the procedure is no longer available are too far away to make the trip to Kansas. The state was already an abortion destination for large numbers of women from Missouri, Oklahoma and Texas before the U.S. Supreme Court overturned Roe v. Wade(link is external) last month.

In the past year, Kansas abortion clinics saw a flood of patients from Texas(link is external) and Oklahoma(link is external) because those states enacted significant bans on abortion. That made Kansas, where anti-abortion Republicans control the Legislature, an unlikely refuge for abortion care. A trigger law in Missouri kicked in after the high court decision, effectively banning abortions in that state.

In recent years, the majority of abortions in Kansas were performed on women who do not live in the state.

With more states restricting access to abortion, those Kansas clinics were braced to see more women searching for services in Kansas.

But Zack Gingrich-Gaylord said the Trust Women clinic in Wichita hasn’t yet seen a rise in women from out of state since the high court’s ruling.

“A lot of people will not be able to leave their states because it is now simply too far,” he said.

In Kansas, abortion remains legal because it is protected by a 2019 Kansas Supreme Court ruling(link is external) that found the state’s constitution protects access to abortion.

The state currently has four clinics located in the metro areas of Wichita and Kansas City. Gingrich-Gaylord said the state’s abortion care was already reaching capacity even before the federal ruling.

With Missouri joining the states restricting access, the available capacity in the Midwest was further reduced. But the number of women who need abortion care has not.

“This really just enforces why people deserve local access to abortion care in their own communities,” Gingrich-Gaylord said. “People in Kansas deserve more meaningful access than they have right now.”

Kansans will soon vote(link is external) on an amendment to the state constitution that would say that it does not provide the right to abortion.

Supporters of the amendment say the change would put decision making on abortion restrictions back in the hands of the state’s lawmakers. Critics say it would open the door for the state to pass more restrictive laws, up to a total ban on abortion, like other Republican-dominated states.

“That means we really have to defeat that amendment just to keep the local access we have here,” Gingrich-Gaylord said.

The vote will take place August 2, during the state’s primary election. All registered voters in Kansas will be able to cast a ballot on the issue, regardless of their political affiliation.