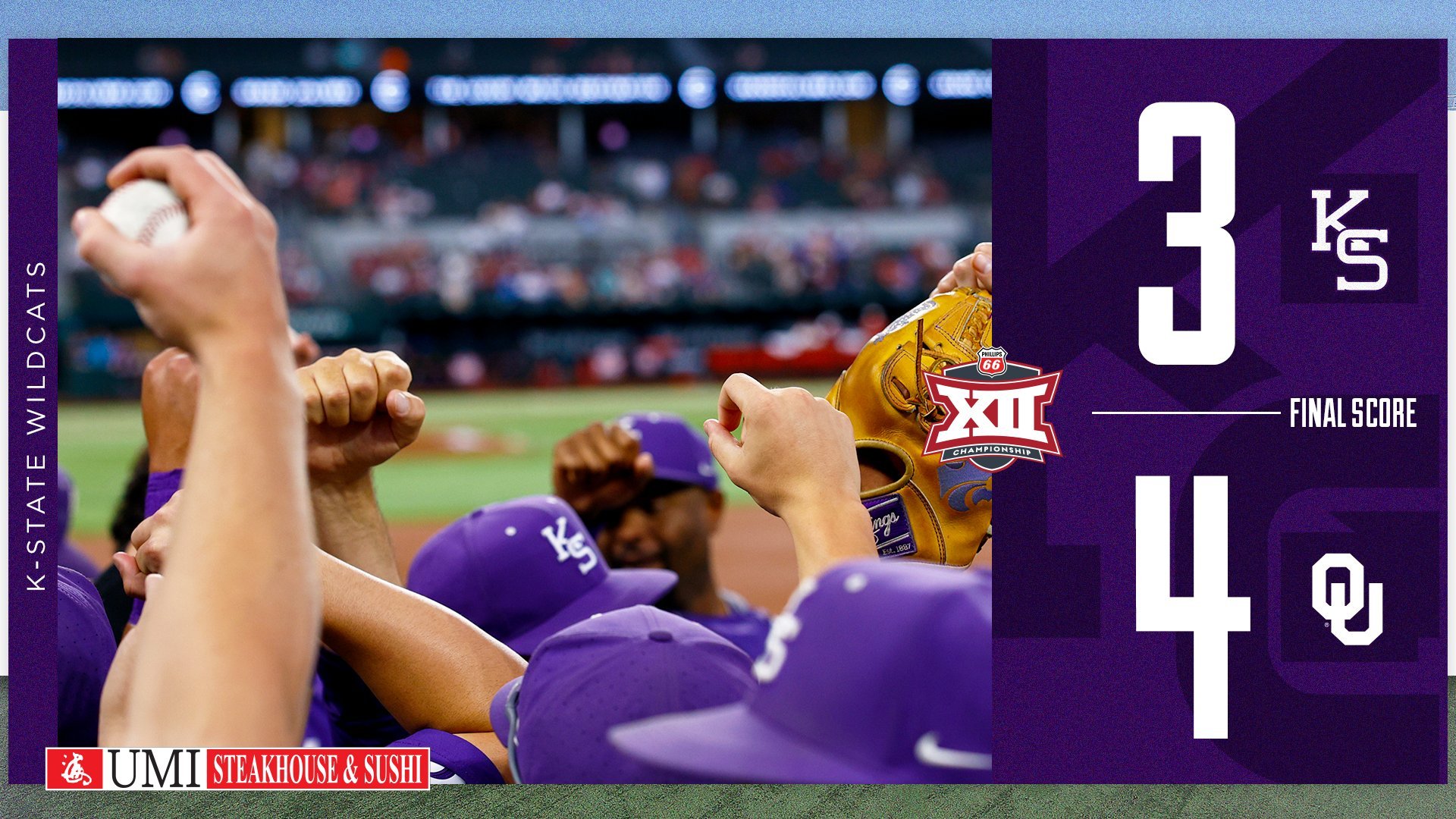 ARLINGTON, Texas – K-State’s postseason run came to an end Saturday with a 4-3 defeat to No. 22 Oklahoma in the semifinal round of the Phillips 66 Big 12 Baseball Championship at Globe Life Field.

The Wildcats (29-29), who reached the semifinal round of the conference tournament for the second straight year, held a 2-1 lead through five innings until Jimmy Crooks delivered a go-ahead two-run double in the bottom of the sixth.

After Peyton Graham’s solo homer in the seventh doubled Oklahoma’s lead, Cole Johnson brought the Cats within a run with his RBI single in the eighth. With two runners on, OU closer Trevin Michael went on to record a five-out save to send the Sooners to the Big 12 title game.

“It was a good game; we had our chances it just comes down to pitching and defense and who can get a two-out hit,” said head coach Pete Hughes . “When you play a good game it’s always the little things you’re going to talk about. The big home run by Peyton Graham in the seventh put them up two.

“I’m proud of our guys and life in the losing bracket is tough, we handled it really well. They are a resilient group of guys.”

K-State answered Oklahoma’s first-inning run to tie the game in the second. Johnson led off the frame with a single and scored on Justin Mitchell’s single to right field. An errant throw by right fielder John Spikerman allowed Johnson to come home and Mitchell to stand on third with nobody out.

Oklahoma starter David Sandlin retired the next three hitters he saw to leave Mitchell at third base and keep the score level.

“We left runs on the bases early in that game and they all count,” Hughes added. “A runner on third base and no outs and can’t get a run across. It’s critical in those situations to be able to situationally hit to win a one-run ballgame.”

After allowing the early run, Griffin Hassall held the Sooners’ offense scoreless over the next four innings. He scattered just three hits in that stretch after yielding three hits in the opening inning.

The score still sitting at 1-1 through four innings. Dominic Hughes, who reached by being hit by a pitch, scored to put K-State in front after back-to-back singles by Kaelen Culpepper and Cash Rugely .

Hassall pitched into the sixth inning, exiting after Blake Robertson singled and Taylor Tredaway doubled to begin the inning. Both came around to score on Crooks’ double to center field after Dylan Phillips moved to the mound from first base.

Phillips gave up the solo homer to Graham and went on to equal his career-long outing with three innings. Phillips appeared three times in the tournament, recording two saves with seven strikeouts over five innings.

Sandlin logged a career-high 10 strikeouts over seven innings, as he gave up just one earned run (two total runs) on five hits. Sandlin limited the Cats to one hit with two outs and two hits with runners in scoring position.

“I thought he threw a lot more strikes this time around, specifically early in the count,” Hughes said of Sandlin. “He had advantage counts the whole day and then he pitched down with his slider, which we had trouble seeing. We didn’t really have trouble seeing it the first time we saw him (in Norman). I give him a lot of credit, he was super competitive in the zone.”

Johnson, Mitchell and Rugely each finished with two hits to lead K-State while Crooks, Graham and Tredaway all carded two-hit days for the Sooners.

MOMENTS THAT MATTERED
Oklahoma struck first with a two-out RBI single from Tredaway in the opening frame, bringing home Graham who earlier doubled with one out. Hassall worked around three hits in the first inning to limit Oklahoma to one run.

Johnson and Mitchell each singled to start the second, as Mitchell’s knock along with a throwing error by Spikerman allowed Johnson to score the tying run. On the error, Mitchell moved to third base with nobody out, but was left there after Sandlin retired the next three Wildcats to keep the game even at 1.

K-State broke the tie with Rugely’s RBI single in the top of the fifth. He marked the third straight Wildcat to reach against Sandlin in the frame, as Hughes was hit by a pitch and Culpepper singled to help K-State takes its first lead, 2-1.

Robertson singled and Tredaway doubled to begin the Sooner sixth, ending Hassall’ afternoon. Phillips, who has recorded two saves in the tournament, took the mound after starting at first base and inherited the pair in scoring position.

On Phillips’ first offering, Crooks drove a double to deep center field to score both runners to give OU a 3-2 lead.

In the seventh, Graham turned on a 1-2 fastball from Phillips and sent a solo homer over the wall in left field to push Oklahoma’s lead to 4-2.

A Rugely leadoff single and a Goodwin walk put the potential go-ahead runs on the base paths in the eighth. Johnson singled off Michael to bring in Rugely, trimming OU’s lead to 4-3. Michael then got the next two hitters out to escape the jam and went on to finish a five-out save.