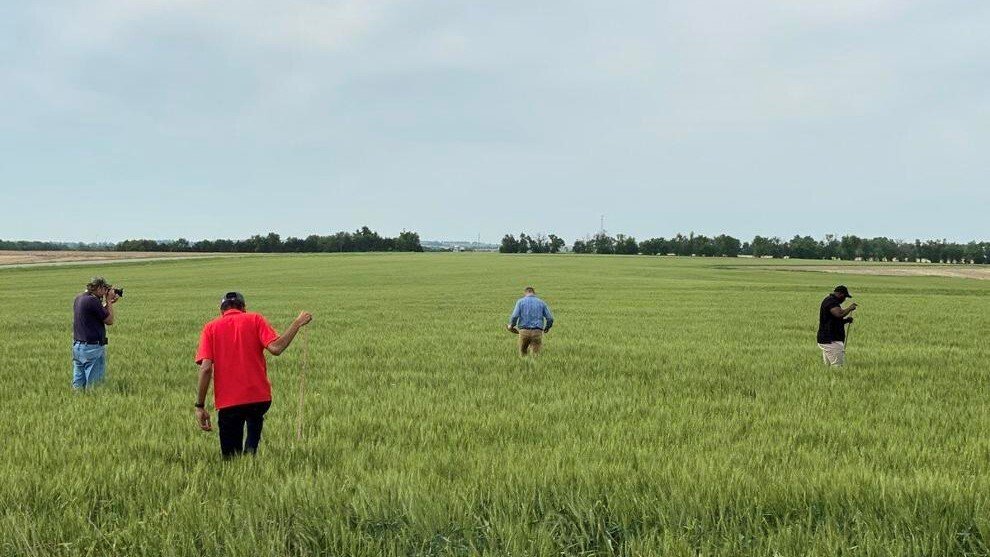 The composite estimate was for 261 million bushels. A year ago Kansas wheat farmers produced about 364 million bushels. Drought stress was the story of the 2021-22 crop and Aaron Harries, vice president of research and operations for Kansas Wheat, said it was about what he and his group had estimated.

The U.S. Department of Agriculture’s National Agricultural Statistics Service had estimated the Kansas crop at 271 million bushels before the May 16 to 19 Wheat Quality Council tour. Six routes gave growers, traders and millers and members of the media time to get a first-hand look at the crop.

“If you back to the map our group thinks abandonment will be higher than what USDA thinks,” Harries said as USDA pegged abandonment could be at 6%. “The group thought abandonment could be at 10% and that was a big variable. Most people are in agreement that even if the weather was perfect between now and harvest, the number (of bushels) could improve a little but not much. The hope is to keep floor where it is now.”
There were pockets on the tour where the caravans could report quality wheat was in the field but those were too few.

“The biggest surprise on our route was in Pratt and Kingman counties and how disappointing it was in that region compared to what we thought we might find.”
The drought stress will likely mean an earlier start to the harvest, Harries said.

Naomi Blohm, a senior market advisor with Total Farm Marketing, and a market columnist for High Plains Journal, said as disappointing as the results were they were not unexpected for Kansas farmers.

“This is what they expected it to be and is not a shock to the rest of us watching it unfold,” Blohm said. “The USDA will likely make the yield reduction on the next World Agricultural Supply and Demand Estimates report in June. I would say in a sense, though, that this news is priced into the market from the standpoint of lower global supplies and still strong demand. The Kansas crop being yet another notch smaller, in and of itself, is not a market mover due to the already substantial price gains.”
Due to lower global supplies, prices should remain at an elevated value, yet that does not mean that prices need to sit at “all-time highs” for months on end, she said. There will be ebbs and flows along the way for prices. Think long term and look to lock in prices for next year as more wheat across the world is likely going to get planted, Blohm said.

The wheat story is one that fits into vein of nine grain and oilseed commodities in the U.S. with tight ending stocks that are projected for the remainder of this year and next year and as a result prices will likely remain higher in the big picture, Blohm said.

“But keep in mind, seasonally, prices usually work lower for grains during mid-June to early July,” she said. “Corn and bean prices could drop $1 to $2 (a bushel) and still be in a long-term uptrend, but what does that mean for your farm if you are selling your grain at that lower value? Be constantly monitoring the markets. Be aware of seasonals. Be aware of global weather. Beware of any demand shifts.”

Day one
The bulk of the scouting came on the first days of the tour.

Those who might have been hoping for bright spots of top production were likely to be disappointed during the first day of the Kansas Wheat Tour on May 17.

Harries said those in his caravan projected yields of about 38 bushels per acre, compared to 48 bushels a year ago.

“All of the wheat was short and most was drought stressed,” he said of the U.S. Highway 36 route.

Recent rains came too late, Harries said, of what his group observed on the northern route. There was some hope the moisture could help but the crop was already too far along and stressed although it will provide much help for the spring planted crops.

“There is no upside right now,” Harries said when it came to the wheat crop that was planted last fall. “It is what it is.”
Crop adjusters are in demand, he said, who have been zeroing out wheat because it is too short.

Producers, he said, have been realistic for some time and they have focused on planting spring crops, which traditionally are corn, soybeans and sorghum.


Day two
After a disappointing first day on the north corridor route the second day, May 18, provided a glimpse of patches of better Kansas wheat.

Harries was part of the caravan that headed south of Colby to Garden City, then headed east to Larned and then angled south to Pratt before finishing up in Wichita.

Harries’ instincts put yields closer to 40 bushels per acre and several others who were scouting agreed with him.

“There was a lot of variability. It looked short on yields south of Colby,” Harries said.

However, the caravan did find a pocket of wheat north of Leoti in west central Kansas that looked promising. “There was some pretty good wheat because of a swath of snow that fell earlier in the year. Unfortunately that was a very narrow band.”
Farther south to the Garden City region the story returned to extensive drought stress that was highly visible, he said. Some places did receive rain earlier in the week, Harries said, adding while it put moisture on the top inch or two of the soil there was little subsoil moisture.

Wheat in Pratt County region also had suffered from drought stress, Harries said, adding he had hoped there might be pockets of good wheat but moisture eluded the area when the crop needed it. As his tour got closer to Wichita the quality of the wheat was dramatically improved.

“Overall, I don’t think it was quite as dismal as yesterday (on the northern route May 17). You could clearly see the first half of the growing season was drought stricken. There were places where the top of the head showed promise but it needed more water and did not get it.”
Drought stress was the theme of the two days and overwhelmed all other challenges growers faced.

“No disease pressure was found,” Harries said, then quipped. “They need rain, too.”