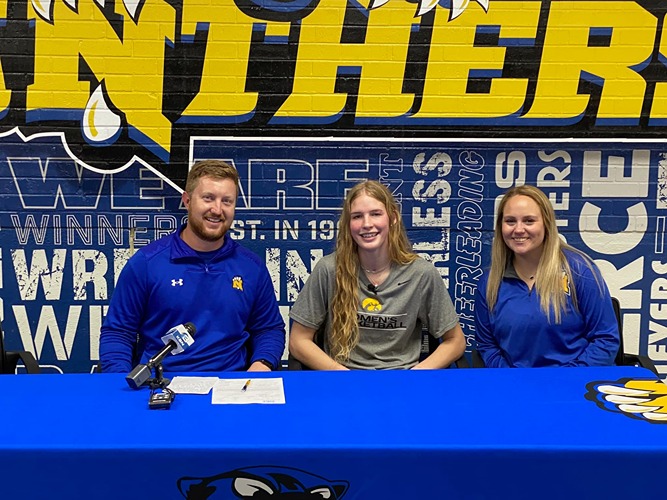 NICKERSON, Kan. – Typically, the signing of a national letter of intent is more of a formality than anything else. Wednesday afternoon at Nickerson High School, it was much different, as Ava Jones signed her NLI with the women’s basketball program at the University of Iowa.

Ava’s signing comes four months and four days after she and her family were struck by an impaired driver as they were walking down a sidewalk in Louisville, Kentucky. They were there to attend a basketball tournament Ava was playing in with her Wheat State Elite summer team. Her father, Trey Jones, died of the injuries he sustained. Ava, her mother Amy, and her brother Creek were also hurt.

Iowa officials said shortly after the accident that they would honor Ava’s commitment whether she could play or not. “We are signing Ava because we believe in her and she believes in us,” said Iowa Women’s Basketball head coach Lisa Bluder. “When she takes the floor for Iowa, it will be a special moment for all of us.”

Ava suffered significant injuries, including tears to all four ligaments in both knees. In the past few days, she has begun working again with her trainer, Craig Nicholson, and said being able to do so has made her feel more normal.

“I’ve been waiting for this my whole life,” she said. “It means a lot.”

After signing the letter, Ava had a lot of people to thank including her extended family, teammates, coaches and trainers. “It’s not been easy for my family,” she said in expressing gratitude.

In addition to many family members, Ava was joined at the signing by her coaches, trainers, teammates, NHS staff and administrators, Wheat State Elite director Dylan Evans, and members of the community.