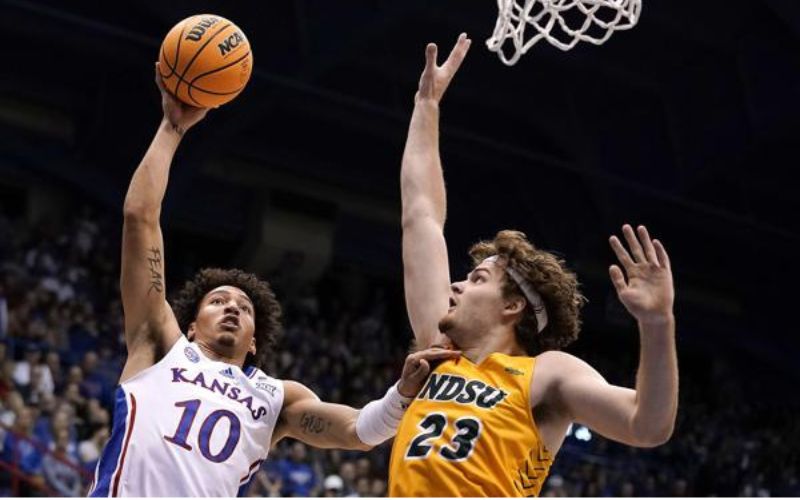 LAWRENCE, Kan. (AP) — Kansas did exactly what was expected of the nation’s No. 5 team when the defending national champions played Omaha and North Dakota State to open the season: win in routs.

The stakes are about to get a whole lot higher with Duke awaiting in the Champions Classic.

Jalen Wilson had 21 points and nine rebounds, Gradey Dick added 12 points and MJ Rice scored 10 in his college debut on Thursday night, helping the high-flying Jayhawks roll to a 82-59 victory over the Bison in their final dress rehearsal before facing the No. 7 Blue Devils in Indianapolis.

“We’re just trying to get better,” said Jayhawks assistant Norm Roberts, who handled his second game in place of suspended coach Bill Self. “It’s not about who we’re playing. We’re talking about how we can improve as a basketball team. We’re still a long way from where we’re going to be. We’re gaining on it. We’re getting better.”

It was hard to see any flaws in the first half Thursday night. Kansas built a 48-19 lead before coasting to the victory.

“Shame on me if I don’t recognize what success looks like, and that’s a product of success over there,” Bison coach David Richman said. “That’s what we talked to our guys about: There are no secrets. Those guys play their tails off, they look like men, they’re unselfish. That’s a fun group to watch as you’re scouting them. Not a very fun group to play.”

North Dakota State gave the Jayhawks all they could handle when they met in December 2020 in Allen Fieldhouse, leading for more than 28 minutes only for the Jayhawks to score the final seven points and eke out a four-point win.

Wilson got off to a hot start, scoring 17 points in the first half, and Rice provided some additional energy with a high-flying dunk after missing the Jayhawks’ opening win over Omaha with a back injury earlier in the week.

“I’ve been dreaming about this for a long time,” Rice said. “When I finally got the opportunity, it was like, ‘Wow.’”

But it wasn’t until Wilson’s bucket with about 12 minutes to go that the game got out of hand.

Kansas proceeded to score 10 straight points, highlighted by Rice’s ally-oop dunk, and the run stretched to 13-2 on a 3-pointer by Joseph Yesufu. And when the Bison finally got a bucket, Yesufu answered with another 3, triggering another 11-0 run that gave the Jayhawks a 40-16 lead by the under-4 minute media timeout.

The Jayhawks shot 56% from the field in the first half, helped by four ally-oop dunks, while the Bison resorted to shooting desperation 3-pointers late in the shot clock. Twenty of their 28 shots in the first half came from beyond the arc.

The Bison outscored Kansas in the second half, though much of it came against the Jayhawks’ bench.

“We have great big expectations in our program that in March we’re competing against Arkansas or Kansas,” Richman said, “and hopefully these are great learning experiences for us.”

The Jayhawks were brutally efficient on offense, but they really shined on defense. Texas Tech transfer Kevin McCullar Jr. has lived up to his billing as a perimeter stopper, and KJ Adams Jr. and Udeh dominated the paint. North Dakota State was just 9 of 32 from beyond the arc and the Jayhawks scored 22 points off turnovers.

While the Jayhawks head to Indianapolis to face the Blue Devils in one of the marquee nonconference games of the season on Tuesday night, the Bison travel back to Fargo for their home opener against Pacific on Sunday.