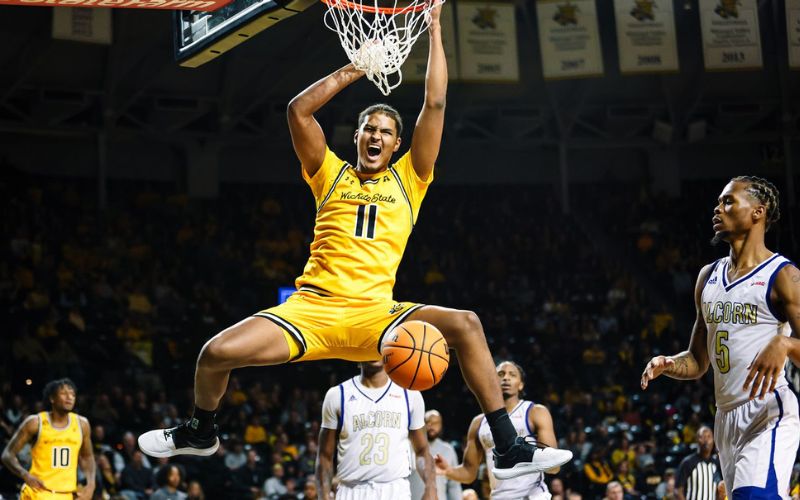 The Shockers (1-1) made three-point field goals on each of their first two possessions but hit just two more the rest of the day en route to a rare November setback on their home floor. They’re 50-3 in the 20 seasons since Charles Koch Arena’s renovation.

WSU converted 18 of its 30 shots inside the arc but just 4-of-24 from beyond it to finish at just over 40 percent overall.

Alcorn (1-1), the defending SWAC champions, pushed Ole Miss for the better part of 30 minutes earlier this week before fading. Saturday they put a full 40 minutes together, shooting 54 percent in the second half.

The Braves put the Shockers on their heels early, sinking four of their first five three-point tries for a 16-6 lead near the 12:00-mark of the first half.

WSU clamped down defensively and rode the scoring tandem of Walton and Pohto during a 14-0 run that allowed them to regain the lead just before halftime.

Helped by Pohto’s nine points, the Shockers enjoyed a 31-28 advantage at the intermission.

WSU committed just five second-half turnovers, but four of them came during a disastrous stretch that turned the game in Alcorn’s favor.

Pohto sank a pair of free throws for a 46-41 lead with 11:34 to play, but the Shockers came up empty on each of their next eight possessions, during which they went 0-for-4 with four giveaways.

The Braves capitalized with an 11-0 run. Keondre Montgomery banked in a deep three and Jeremiah Kendall converted a fastbreak layup for a 52-46 Alcorn advantage with 6:05 to play.

Walton’s layup with 4:58 to go stopped a six-and-a-half minute scoring drought, but the Braves kept the Shockers at arm’s length the rest of the way.

WSU had been 18-0 collectively against the 12 current members of the SWAC.

The Shockers hit the road for Richmond next Thursday (6 p.m. CT, ESPN+) then travel to Kansas City for the Hall of Fame Classic, Monday-Tuesday, Nov. 21-22.