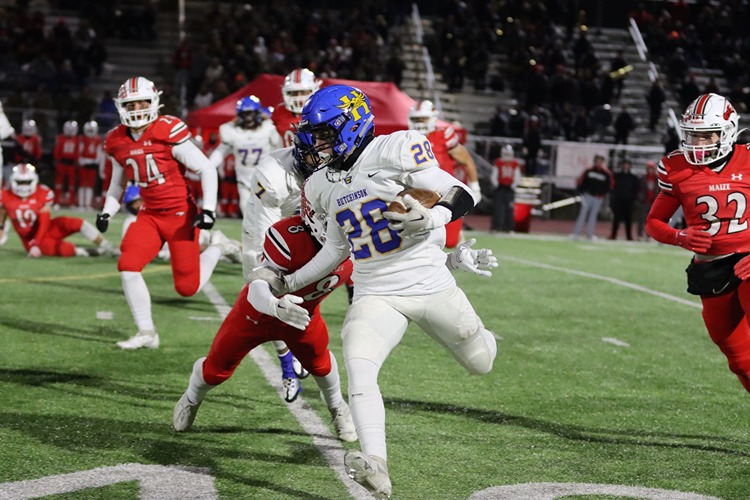 MAIZE, Kan. – Few offenses in Kansas have been better than Maize’s this season.

The only Class 5A team to navigate the first 10 weeks undefeated, Maize has piled up the points. The fewest the Eagles had scored through 10 games was 41 in a win over Hutchinson.

The fourth-seeded Salthawks made the trip back to Maize on Friday in the 5A quarterfinals. The defense clamped down on Maize’s offense like no team had done all year, but despite that effort, and even having more yards than top-seeded Maize, the Salthawks fell 21-14 on a frigid Friday.

Maize’s illustrious quarterback, Kansas State-bound Avery Johnson, completed just 6 of 16 passes, but he made the most of those completions, earning 191 yards and three touchdowns.

Hutchinson struck first early in the second quarter, as Nic Lange ran in the end zone from 2 yards, capping a 19-play, 74-yard drive. Johnson answered with a 34-yard touchdown pass to Bryce Cohoon, but Hutch reclaimed the lead with 5 minutes, 20 seconds before halftime on Devon Spiller’s 5-yard touchdown run.

Johnson’s 81-yard touchdown pass to Justin Stephens with 4:40 left in the third quarter was the decisive score.

Noah Khokhar led the Salthawks on the ground with 102 rushing yards.

Hutchinson finishes its season 8-3. The Salthawks’ only losses came to teams still playing, including twice to Maize and 6A semifinalist Derby. Only that 41-13 loss to Maize came by more than seven points.

Despite Quarterfinal Loss, Buhler Soccer Season Was One for the Record Books

Salthawks Turn It On in the Second Half, Take Down Liberal