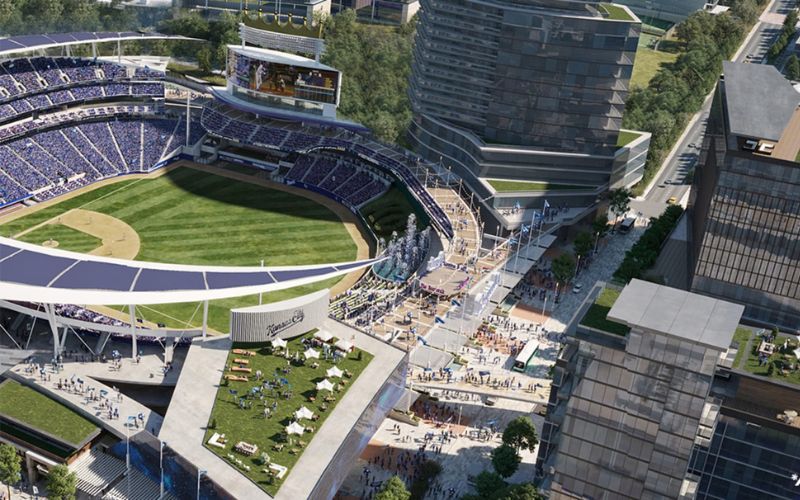 KANSAS CITY, Mo (Mlb.com/Royals) – The Royals made official what has long been the vision surrounding their franchise on Tuesday: They are planning to leave Kauffman Stadium and have started exploring downtown ballpark options for the future.

Royals owner John Sherman wrote an open letter to Royals fans and the Kansas City community, and in it, he outlined the franchise’s plan for a move and thinking behind it, noting that staying at the current Kauffman Stadium is not a long-term solution. The K opened as Royals Stadium in 1973 and is in the Truman Sports Complex in Jackson County, about 20 minutes outside of downtown. The Royals share a parking lot with the Kansas City Chiefs’ home stadium, GEHA Field at Arrowhead Stadium.

Staying there, Sherman said, is not viable with the renovations required.

After over a year of consulting with outside firms, Sherman stated that a new ballpark “would be a far better investment, both for local taxpayer dollars already supporting our facility, and for the Kansas City community.”

“We are excited to now share that we have several leading locations under close consideration, both in downtown Kansas City and close to it,” Sherman wrote.

“Each site offers unique opportunities. We look forward to seeking input from the public over the coming months about our vision to best serve our residents and build on the momentum our city is experiencing. To accomplish this move, our plans will be contingent on continuing our public-private partnership and investment with multiple local jurisdictions and the State of Missouri.”

It is unclear yet what sites the Royals are looking at, but a spokesperson said they would be revealed soon. The Royals plan to have several community events open to the public to listen and give input.

The Royals’ current lease with Jackson County is set to expire after this decade, and it’s not known yet when they would like to be in a new ballpark.

Sherman, who took over as the Royals’ majority owner in 2019, noted that not only would the Royals be building a new ballpark, but also a “ballpark district,” which he envisions as local restaurants and shops, office spaces, hotels and housing opportunities, as well as public transportation options.

The project would cost an estimated $2 billion, making the Royals’ new home stadium the costliest such project in Kansas City history, which Sherman noted in his letter. It would be a mix of public and private investment, and Sherman wrote that the Royals “would not ask Jackson County citizens to contribute more tax dollars” than they already do now.

“Construction of this new ballpark district could create 20,000 jobs, $1.4 billion in labor income, and an estimated $2.8 billion in total economic output, as well as spur additional adjacent investment,” Sherman wrote, based on studies conducted by outside firms the Royals hired. “We anticipate that the inaugural year of the new ballpark will drive approximately $185 million more in regional economic output than The K does today. Greater regional visitation will sustain more than 600 new jobs, and spending at the new ballpark district and across the region will drive more than $60 million in new tax revenue over the first decade.

The project is very much a work in progress with plenty of work to be done, including a vote to approve the project by residents, but details have been scarce surrounding the Royals’ ballpark plan. On Tuesday, Sherman officially stated his plan to move the franchise downtown, pledging to involve the community in the process going forward.