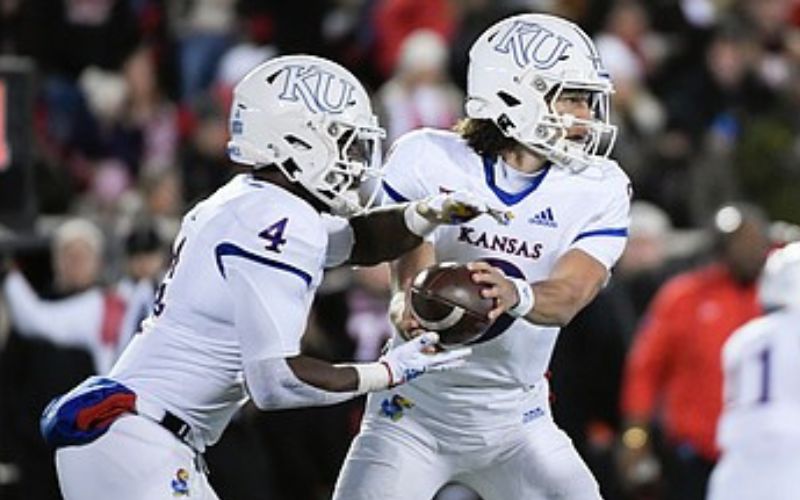 The Red Raiders opened the scoring on their first drive, marching 75 yards on eight plays and capping it with a 6-yard touchdown run from quarterback Donovan Smith to make it 7-0.

The Jayhawks answered right back in emphatic fashion. Faced with a 4th-and-1 on the first drive, quarterback Jason Bean sold a play-action handoff, before finding tight end Jared Casey for a 66-yard touchdown pass to knot the game at seven.

The touchdown catch was the third of the season for Casey and second straight week the tight end found the end zone. It marked the third passing play of at least 60 yards this season for the Jayhawks.

The Red Raiders then scored on their next three possessions, scoring two touchdowns and adding a 33-yard field goal to grab a 24-7 lead. The Jayhawks missed a field goal attempt of their own and turned the ball over on downs during the 17-0 run from Texas Tech.

The Kansas defense then stood up with a three-and-out, forcing Texas Tech’s first punt of the game.

The Jayhawks wasted no time finding the end zone on the ensuing drive. After a five-yard rush on first down, Neal sprinted 63 yards to get the ball to the Texas Tech five. After a two-yard run from Neal, Bean found Luke Grimm for a three-yard touchdown to close the gap to three at 24-21.

After a scoreless third quarter for both teams, Texas Tech scored eight seconds into the fourth quarter on a 9-yard rush by quarterback Tyler Shough. A failed two-point conversion by the Red Raiders made the score 33-21.

Kansas responded on its next possession with a six-play, 60-yard drive over 1:38 that finished with a 20-yard touchdown pass from Bean to wide receiver Quentin Skinner in the back corner of the end zone. Skinner’s touchdown was his fifth of the season. The score trimmed the deficit to 33-28.

Texas Tech would add a field goal on its next drive to push the game to 36-28. Then, on the first play of the ensuing possession, Texas Tech’s defense forced a fumble on a strip sack, taking over at the Kansas eight-yard line.

The Red Raiders went on to score three plays later on a five-yard run from Tahj Brooks. The 43-28 score would ultimately be the final.

The Jayhawks will return home next weekend for Senior Day on Nov. 19 to host the Texas Longhorns. Kickoff time for the matchup will be determined on Sunday.