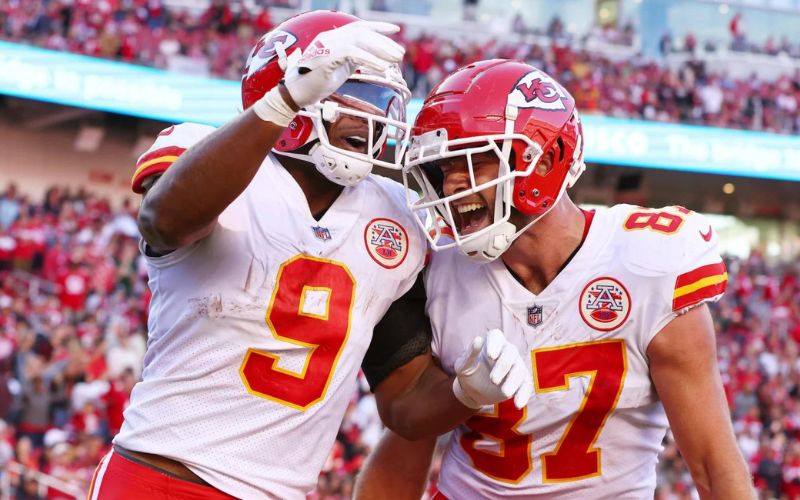 KANSAS CITY, Mo. – The Kansas City Chiefs enjoyed a well-deserved weekend off this past Sunday, but despite not playing, the Chiefs still maintained their high-ranking in the various NFL “power rankings” from around the web.

Kansas City checked in at No. 3 on ESPN this week, trailing the Buffalo Bills and Philadelphia Eagles. ESPN’s individual analysis for each team was centered around reasons for optimism, and for Kansas City, their answer was simple: quarterback Patrick Mahomes. Here’s what they had to say about Mahomes and the Chiefs:

“The Chiefs have three comeback wins after trailing by 10-plus points already this season. Mahomes is 13-9 (including playoffs) after trailing by 10-plus points — he is the only QB since the start of the 1950 season with a winning record after trailing by double digits (minimum 10 games). So they have good reason to believe they’re always in the title hunt as long as they have Mahomes as quarterback. The Chiefs have many other reasons to believe they can win another championship, including an improved pass rush that has 19 sacks.”

The Chiefs also landed at No. 3 in NFL.com’s rankings this week, and while Kansas City didn’t play a game last Sunday, Around the NFL writer Dan Hanzus pointed out that the Chiefs were still busy, acquiring wide receiver Kadarius Toney from the New York Giants. Here’s what Hanzus wrote about the move:

“Toney’s talent could translate beautifully in an offense run by Andy Reid and Patrick Mahomes.”

Elsewhere, the folks at The Ringer maintained the consensus trend in their rankings as well, slotting the Chiefs at No. 3 behind Buffalo and Philadelphia. Writer Austin Gayle pointed out Mahomes’ continued brilliance in his analysis.

“In a league where total completions on throws of 20-plus air yards was down from 349 to 244 through the first seven weeks of the season as compared with 2021, Mahomes has mastered the NFL’s midrange shot. Targeting 10 to 20 yards downfield, Mahomes ranked first in yards per attempt (12.6) and total passing yards (707) before the team’s bye in Week 8. In his first seven games last season, he ranked 29th (8.1) and 22nd (443) in the same statistics, respectively.”

Here’s a look at where the Chiefs landed in a handful of other “power rankings” from around the web:

Chiefs Could Have Thuney, Toney Back from Injury vs Broncos