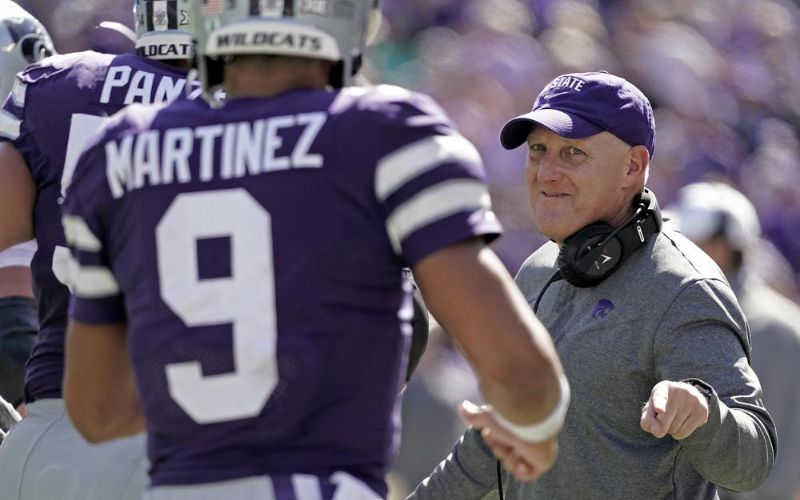 (AP) – The same template has been used to build Iowa State and Kansas State, and both have earned reputations for rising up and challenging the Big 12 football hierarchy.

The Wildcats’ next step is a visit to Ames, Iowa, on Saturday night for the 106th renewal of “Farmageddon,” an appropriate nickname for a series between a couple of hard-working programs from agricultural states.

Over the last five years, according to 247Sports, Kansas State has signed one four-star recruit and Iowa State has signed six. Texas and Oklahoma, meanwhile, have combined for 13 five-stars and 146 four-stars.

While Iowa State and K-State are fixtures in the bottom half of the annual Big 12 recruiting rankings, both are in the top half for number of conference wins since 2019.

The current Wildcats’ offense is built around Adrian Martinez and Deuce Vaughn, who have combined for more than 1,100 yards rushing. Martinez was a four-star recruit who signed with Nebraska in 2018 and the Cornhuskers’ starter for four losing seasons before he transferred. Vaughn, the 11th-ranked three-star in the Wildcats’ 2020 recruiting class, is the Big’s leading rusher.

“It’s not always the five-star kids,” said Klieman, who has won three of four games against Oklahoma since he took over in 2019. “It’s the kids that want to play their tail off for their school and for their brother.”

Iowa State has a four-star recruit in quarterback Hunter Dekkers. His favorite target, Xavier Hutchinson, was a three-star who has been a top-three Big 12 receiver for three years since transferring from a junior college. Defensive end Will McDonald, who could have declared for the NFL draft after last season, was a three-star who is only the fourth Big 12 player to record at least 30 sacks.

“Investment in kids, attitude and effort, belief and process, I think those are all things that we worked really hard to build,” Cyclones coach Matt Campbell said. “When you watch their team, those are the things that jump out to you. So yeah, I think a lot of parallels in terms of how the infrastructure of the programs were built.”

The Cyclones are dinged up at running back. Starter Jirehl Brock was hurt on the fourth play from scrimmage at Kansas last week, and Cartevious Norton has been out since the opener.

Deon Silas or Eli Sanders would be in line for his first start if Brock can’t play. Silas carried 12 times for 29 yards and caught four passes for short gains in the 14-11 loss.

“Deon Silas played the best game of his career,” Campbell said. “Really proud of what he did and certainly what he can continue to do for us.”

K-State’s 1.8-to-1 turnover margin is second-best in the nation, with eight of its 11 takeaways coming against Missouri and Texas Tech.

“That’s a big recipe for success when the wins and losses happen, us finding ways even though we’re giving up too many explosive plays,” Klieman said.

K-State has allowed seven runs of 20 yards or longer, most in the Big 12, and three passes of at least 50 yards, tied for most in the conference.

Martinez, with a combined 319 rushing yards against Oklahoma and Texas Tech the last two weeks, joined Louisville’s Lamar Jackson and Auburn’s Cam Newton as the only Power Five quarterbacks the last 15 years with 300 yards and seven touchdowns over consecutive games.

K-State has recorded 10 or more tackles for loss in three of its first five games for the first time since 2012. The Wildcats have 37 and are on pace to surpass the 90 TFLs they had last season. Star defensive end Felix Anudike-Uzomah leads the team with seven.

Iowa State and K-State have played every year since 1917, with the Cyclones leading the series 52-49-4. ISU will try to beat the Wildcats a third straight time.