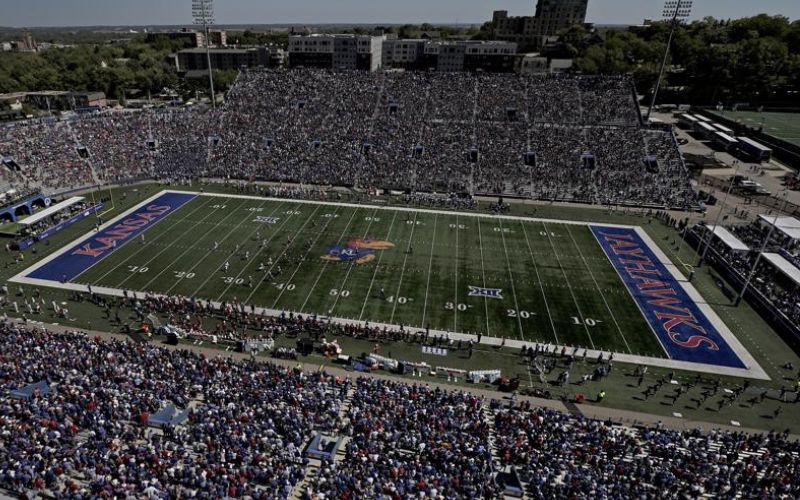 Fans watch during the second half of an NCAA college football game between Kansas and Duke Saturday, Sept. 24, 2022, in Lawrence, Kan. Kansas won 35-27. (AP Photo/Charlie Riedel)

LAWRENCE, Kan. (AP) — Kansas State barged into the Top 25 after its win at Oklahoma on Saturday night, and there’s a good argument to be made that the Wildcats’ biggest rival — just down Interstate 70 — deserves to be there, too.

As it stands, Kansas is just outside of the rankings. You read that correctly.

The long-downtrodden Jayhawks are among the 21 of 131 teams in the Football Bowl Subdivision that have yet to lose this season. They knocked Duke from those ranks Saturday, which was enough for Kansas to show up on 43 of the 63 Top 25 ballots — leaving them just a few points behind the 25th-ranked Wildcats.

Asked whether he puts any stock in it, Kansas coach Lance Leipold replied Tuesday: “I have not. Never have.”

There’s a lot of folks in the Sunflower State that do, though.

Only five states have multiple programs in the Top 25. Kansas could become the sixth if the Jayhawks and Wildcats can inch their way one spot higher. Kansas (4-0) plays Iowa State on Saturday at Memorial Stadium in Lawrence — a place that sold out last week for the first time in years, while Kansas State (3-1) hosts Texas Tech the same day.

The schools haven’t been ranked at the same time since Oct. 14, 2007, when the Jayhawks were 15th and the Wildcats No. 25. That was the year Kansas won the Orange Bowl and tied its best-ever finish of seventh in the AP poll.

“National recognition — and recognition as a whole — is something that obviously we strive for,” Leipold said of the rankings, “but we don’t control it, so let’s get back to what we can control. If you spend a lot of time worrying about if you should or shouldn’t, you probably won’t be very long anyway.”

Most Kansas fans typically turn their attention to basketball at this time of the year — to the defending national champion Jayhawks. The football fans that are scattered across the state usually have to pin all their hopes on the Wildcats, who have been to bowl games 10 of the past 12 seasons.

Yet the “house divided” flags waving outside of homes from the Missouri border to the Colorado border are flying proudly for the first time in more than a decade.

Make no mistake: Leipold hears the chatter. He sees more people showing up for his weekly news conference, and it is impossible for him to avoid a schedule that’s rapidly filling with interview requests.

“It makes good stories,” he admitted, “but again, I want to keep this team in a good mindset. Stay focused on Iowa State. We left a lot of things out there Saturday that we have to get better at, and I don’t know if you can keep winning games if some of those things keep stacking up on you at the wrong time.”

It took Kansas State about six hours to move on from its win over Oklahoma: The Wildcats didn’t get home from Norman until about 3 a.m. Sunday, then went through normal treatments and game film before getting back to practice Monday to prepare for Texas Tech.

Much like Leipold, that’s exactly how Kansas State coach Chris Klieman prefers it: Don’t dwell on success. Get right back to work, and keep working to ensure more success.

There are plenty of folks patting the Wildcats on the back after rebounding from a brutal loss to Tulane with their stirring upset of the Sooners. But as Klieman noted Tuesday, as quickly as the Wildcats went from downtrodden to darlings, they could be headed the other way with a loss to the Red Raiders.

“It’s one-week seasons,” Klieman said. “It’s hard to predict what’s going to happen in any conference, in any league, so we’ll play them when we play them, where they ask us to play them. Our guys are just excited to be 1-0 in league play and that’s the most important thing for us, trying to continue to play well in the league”