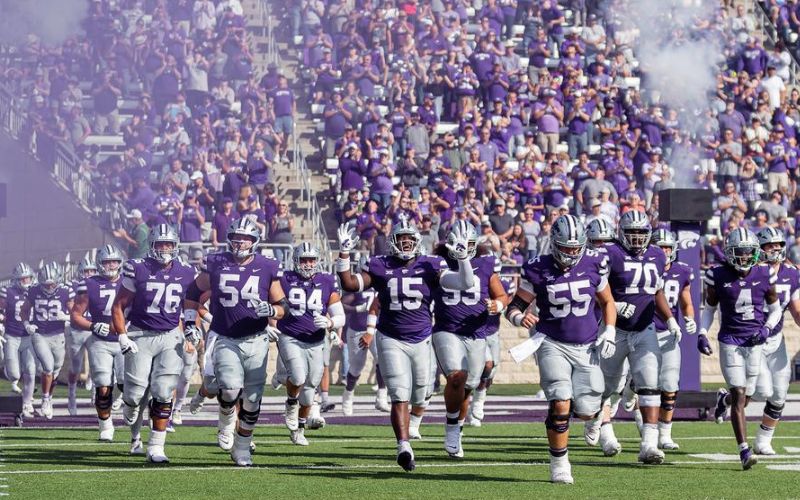 MANHATTAN, Kan. (KStateSports.com) – No. 20 Kansas State is one of just four unbeaten Big 12 Conference teams through the first two weeks of league play. The Wildcats now shift their focus to an opponent that they have traditionally had close games against over the past decade.

K-State, 4-1 overall and 2-0 in the Big 12 Conference, meets Iowa State, 3-2 and 0-2, in Saturday’s 6:30 p.m. kickoff at Jack Trice Stadium in Ames, Iowa (ESPNU), with hopes of hitting the halfway point of its regular season with only one blemish to its ledger.

“We know we’re going to get the best version of Iowa State,” K-State head coach Chris Klieman said at his news conference Tuesday. “This is a big game for both programs. I have a tremendous amount of respect for Matt Campbell. He does a phenomenal job and has for an awfully long time. He’ll have his guys ready to play, I know that.

“We talk about it every week — it really doesn’t matter in this league what happens the previous week. You better make sure you prepare and have great focus and have your best plans and that your kids execute at a high level or you’re not going to win in this league.”

Single digits have decided 10 of the last 14 meetings between the teams. However, each of the last three contests have featured wider margins of victory. K-State beat Iowa State 27-17 in 2019 in Manhattan, then Iowa State won 45-0 in Ames in 2020. Last season, Iowa State also beat K-State 33-20 in Manhattan.

“Throughout my entire career, I just have never really let that enter my mind. We just have to play a really good Iowa State team and get our guys prepared.”
Count defensive end Felix Anudike-Uzomah among those players eager to avenge the 45-0 loss the last time the teams played in Ames.

“We’re very motivated,” Anudike-Uzomah said. “Especially with how much they embarrassed us in 2020, I just know there’s a big chip on our shoulder. It’s going be a great game.”

K-State has won 11 straight over Iowa State when the Wildcats are ranked in the AP Top 25. But Matt Campbell, the only coach in Iowa State history to lead the Cyclones to five consecutive winning seasons, also owns the best winning percentage (.556) of a coach in school history and is particularly stout in Ames.

Iowa State is 23-6 at home since 2018 and has won 16 of its last 18 Big 12 games at home. Iowa State has also beaten at least one nationally ranked team each of the last five seasons. The Cyclones upset No. 8 Oklahoma State 24-21 last season in Ames.

K-State seeks its second 3-0 Big 12 start in eight years and will look to avoid its first three-game losing streak to the Cyclones since dropping five in a row from 1985-89.

“I’m excited, I’m ready to go,” K-State nose guard Eli Huggins said. “Obviously, we haven’t played the last few years the way we wanted to against Iowa State, so I’m excited for it.

“Looking back to 2020, that was probably the worst game I’ve ever been a part of.”
Martinez’s first season as a K-State starting QB draws comparison to a familiar face

In 2011, Collin Klein during his first year as full-time starting quarterback emerged as one of the top stories in college football. He ranked second among BCS quarterbacks in rushing yards per game (87.8) on a school-record 317 rushing attempts. His 1,141 rushing yards ranked 42nd in the FBS and his 27 rushing touchdowns set a FBS quarterback record. Klein also completed 57.3% of his passes for 1,918 yards and 13 touchdowns and six interceptions.

Adrian Martinez is trending toward a similar type of season during this campaign as K-State starting quarterback in 2022.

“The bond he had with Collin Klein, our offensive coordinator — Collin carried the rock pretty well himself when he played,” Klieman said in a nationally-televised appearance on SportsCenter Tuesday afternoon. “Some of the things that even Collin did in college we’re doing with Adrian. Having the ability to have another impact player in the backfield with him in Deuce Vaughn has been helpful.”

Martinez has completed 62.2% of his passes for 654 yards and three touchdowns and no interceptions.

With seven games remaining in the regular season, he is on pace to throw for 1,500 yards and rush for 1,100 yards.

“I still think we’re going to see the best of our offense in the throwing game in the coming weeks because between Malik Knowles, Phillip Brooks and Kade Warner, and some tight ends, we have some explosive guys on the perimeter,” Klieman said. “People are going to try to stack the box to control the run we need to be able to throw the football.”

Third down defense is among the nation’s best this season

K-State is getting opponents off the field after third down at an alarming rate in 2022. One year after the Wildcats ranked 78th in the FBS and sixth in the Big 12 in allowing a 39.9% conversion rate on third down, they currently rank 16th nationally and second in the league at 28.17% — a figure that is on pace for the Wildcats’ second-best third-down defense in at least 15 years.

This season, opponents are completing 47.7% of their passes on third down and the Wildcats have forced two third-down interceptions. The Wildcats also allow an average of 3.59 yards per carry on third down and have surrendered just three first downs on 16 third-down rushing attempts when the opponent is faced with third-and-4 or more yards to go. That’s pretty solid.

Oklahoma was 4-for-13 on third down and Texas Tech was 5-for-14 against the Wildcats, who haven’t allowed an opponent to convert half of its third-down opportunities this season.

K-State tied for No. 2 in the nation in turnover margin

That’s right. K-State has a ball-hawking defense and takes care of the ball on offense. The Wildcats’ turnover margin of 1.80 ranks second in the nation (USC is No. 1 at 2.80) and is on pace for the best turnover margin in the Big 12 in at least the last 15 years.

“We need to win the turnover margin,” Klieman said. “That’s a big recipe for success when the wins and losses happen.”

A major key to the Wildcats’ success? They have already picked off nine passes — already two more than they recorded during all of 2021 — which is on pace for their most in a season since recording 20 interceptions in 2006. K-State ranks second among Power 5 teams in interceptions — trailing only USC (12).

Offensively, K-State is one of just four Power 5 teams not to throw an interception in 2022. The Wildcats’ mishaps are just two lost fumbles — one against South Dakota and one against Texas Tech.

“Even though we’re giving up too many explosive plays on defense – without question we have to limit the explosives, and we’ve played some good offenses — we’ve been able to overcome that by creating a turnover somewhere along the line. We emphasize the heck out of it.

“Collin and the offensive staff continue to preach how important it is not to turn the football over and change momentum. We had one turnover last week that we were luckily able to stop them after that, but those are momentum-changing plays. We have to eliminate them and continue to get them on defense.”

For as much as K-State’s fourth-ranked rushing offense (267.2) against Iowa State’s eighth-ranked rushing defense (83.0) remains a topic this week, the Wildcats’ defense against the Cyclones’ offense commands attention as well.

The Cyclones rank 10th in the Big 12 in scoring offense, total offense, rushing offense, and fourth in passing offense this week. One week after suffering a 31-24 loss to Baylor, the Cyclones suffered a 14-11 loss at Kansas.

“They’re coached well and play ball the right way,” Huggins said. “They have smart players. Lots of shifts, trades, motions and things like that. They try to blur the picture for you as much as possible.

“To be honest, I don’t know where they rank, but just watching film, I wouldn’t think they ranked low.”

Redshirt sophomore Hunter Dekkers is off to a 3-2 record as Iowa State’s starting quarterback. He has only played in 12 games, making him one of the Big 12’s least-experienced quarterbacks. He has completed 69.3% of his passes for 1,316 yards and 11 touchdowns and six interceptions.

“He’s a competitor,” said Klieman, who said that he recruited Dekkers to K-State. “He can throw the deep ball and short ball and he’s elusive. This is only his sixth start, and it just takes time for everybody to develop. I think he’s a terrific football player. I just know the competitor that he is. We’ll have our hands full because he’s not a runner, not a thrower, he’s a dual-threat guy who causes a lot of problems on the edge as well as I think he reads defenses really well. They’ve hit some explosive plays.

“He’s a really good quarterback who’s continuing to learn as a first-year starter.”

This appears to be a prime opportunity for the K-State defense to make a statement prior to its bye week. Although the Wildcats rank second in the Big 12 in allowing just 18.2 points per game, they rank seventh in the Big 12 in giving up 370.2 total yards per contest. Oklahoma scored 34 points and amassed 550 total yards; Texas Tech had 28 and 473.

“The last two games we’ve played had very good offenses,” Huggins said. “OU is an incredible offense and Texas Tech is really good as well. Obviously, we’re not happy. That’s not our standard. I do think every week you’re going to play good offenses, but if you want to win championships we have to be better than that for sure.”