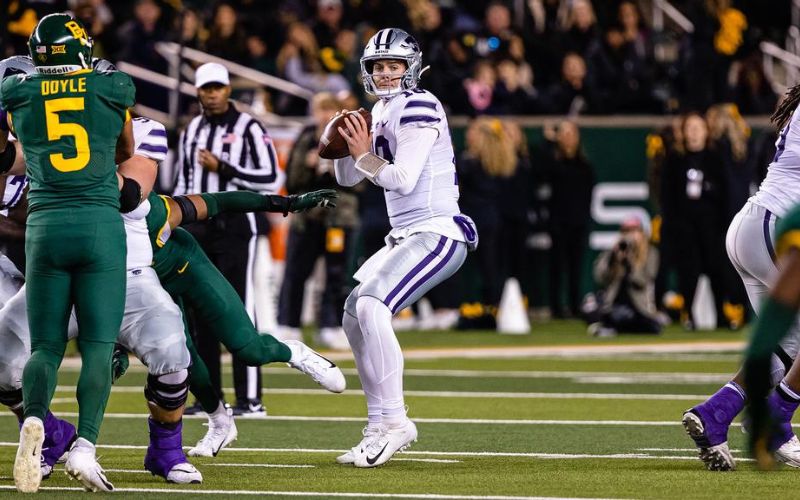 MANHATTAN, Kan. – Three weeks have passed since Will Howard was lifted upon the shoulders of teammates and Kansas State students following his breakout performance against then No. 9 Oklahoma State.

The junior quarterback, who has had to replace starter Adrian Martinez at a moment’s notice due to injury at times this season, continues to be spectacular and has helped lift No. 19 Kansas State on the doorstep of a berth in the Big 12 Championship Game.

And now Howard is going to be “the guy” for K-State, 7-3 overall and 5-2 in the Big 12, with Martinez unable to play when the Wildcats travel to West Virginia, 4-6 and 2-5, for Saturday’s 1 p.m. contest at Milan Puskar Stadium in Morgantown, West Virginia.

“Will is going to be the guy,” K-State head coach Chris Klieman said in his weekly news conference. “It’s his football team. I’m excited for Will. Everybody knows Will is playing at a really high level.”

This will mark the second start for the 6-foot-5, 235-pound Howard this season. Martinez’s latest setback came when he suffered an injury in the Wildcats’ 31-3 win at Baylor last Saturday, springing Howard into action.

Klieman was quick to douse rumors that Martinez would miss the remainder of the season.

In Martinez’s place, Howard promptly threw for 196 yards and three touchdowns against the Bears.

This came after he threw 296 yards and a school record-tying four touchdowns against Oklahoma State — his heroics in a 48-0 win prompting K-State teammates and students to lift him upon their shoulders during an on-field celebration. One week before his career-best effort against the Cowboys, Howard came off the sideline to throw for 225 yards and two touchdowns at then-No. 8 TCU.

Howard has appeared in three games this season. His start at West Virginia will give him four games played. That means if Howard was to play in the regular-season finale against Kansas, or in any other game this season, he would lose his redshirt season.

“With where we’re at and with how he’s playing, I know he’s comfortable and I know we’re comfortable in the fact of it’s a pretty special time for K-State football and he’s playing at a really high level,” Klieman said. “He’s excited about his opportunity.”

Howard has thrown for 707 yards and nine touchdowns over his last three games, the most touchdown passes ever by a Wildcat over a three-game stretch in which they played.

“Let’s go and add to that,” running back Deuce Vaughn said. “Should we? I think we should, no doubt. I’m super excited for him. That’s an unbelievable feat. I didn’t even know that. For him to have that, it just adds to his confidence and adds to the fact that we have confidence in him, and we’re super excited for him this weekend.”

Howard gained ample experience over his first three years. He played in nine games with seven starts as a true freshman in place of injured Skylar Thompson in 2020. Last season, he played in six games with three starts when Thompson missed action again.

“What an experience being a young kid in there two years ago and still working through the offensive scheme, and now I’m able to just sit back there and dissect the defense,” Howard said. “I know the offense like the back of my hand now just because I’ve been in the system so long.”

Over the last two seasons, Howard has thrown 10 touchdowns and two interceptions. He has thrown for 2,227 yards and 18 touchdowns in his career.

“That’s what’s helped him as much as anything is going back on his preparation when he knew he was going to play in 2020-2021,” Klieman said. “Now how he sees defenses and coverages and pressures, you guys can see it as well as I do, his mind is slowing down for him so he can make a lot of the right calls and a lot of the right reads.”

This season, Howard has been ready at a moment’s notice in the event that Martinez has been knocked out of action.

Now Howard has this week to prepare knowing that he is the starting quarterback, which Howard calls “definitely a big mindset adjustment.”

“You kind of want to do that when you’re the backup but it’s just a little different when you really know.”

Martinez, who transferred from Nebraska prior to the season, has started in all nine games in which he’s played. He has thrown for 1,261 yards and six touchdowns and one interception and has rushed for 615 yards and 10 touchdowns.

He remains on the verge of becoming just the second FBS quarterback to reach 10,000 passing yards and 3,000 rushing yards in a career. One week after earning Big 12 Offensive Player of the Week with 382 total yards and five touchdowns in a 41-34 win at then-No. 6 Oklahoma, Martinez earned Big 12 Newcomer of the Week after rushing for a career-high 171 yards and three touchdowns while throwing for 116 yards and one score in a 37-28 win over Texas Tech on October 1.

“Let’s not forget he probably had one of the top five performances in all of college football at OU,” Klieman said. “I think sometimes people forget that, but the kid probably had one of the best performances of any player in college football in that win, but I am frustrated for him that when he got dinged up against Iowa State he just couldn’t get it back. Then when he finally got it back, something else comes up. It’s bad luck a little bit.

Howard, a native of Downingtown, Pennsylvania, expects many family members and friends to be in attendance to witness as he takes center stage against the Mountaineers.

“It’s only four hours away so I’ll have a lot of people there,” he said. “As far the Big 12 goes, there aren’t a lot of teams you play out east, so I’m excited about it. I’ve definitely been thinking about this one.”

Klieman opened his news conference by confirming that junior transfer safety Kobe Savage will miss the remainder of the season due to an injury he suffered against Baylor.

“We lost Kobe Savage for the year,” Klieman said. “It’s really tough because Kobe was playing such great football for us and he was devastated. We’ll lose him for the year and that’s disappointing.”

Savage, who was named Big 12 Newcomer of the Week after collecting a career-high 11 tackles at then-No. 6 Oklahoma, ranks second on the team with 58 tackles, including three tackles for a loss, and he ranks second in the Big 12 with three interceptions. The 5-foot-11, 206-pound native of Paris, Texas, had emerged as an energetic and fiery defensive leader for the Wildcats.

Senior linebacker Daniel Green said that the defense will play the remainder of the season for Savage.

“He’s one of our Mob mentality guys and really embraces what we do on defense, so it really hurts having someone like him go down,” Green said. “We’re going to rally around him. We’re going to play for him. We told him after what happened in the first quarter, we said, ‘We got you, bro. We’re riding for you.’ We’re going to finish this season for him strong.”