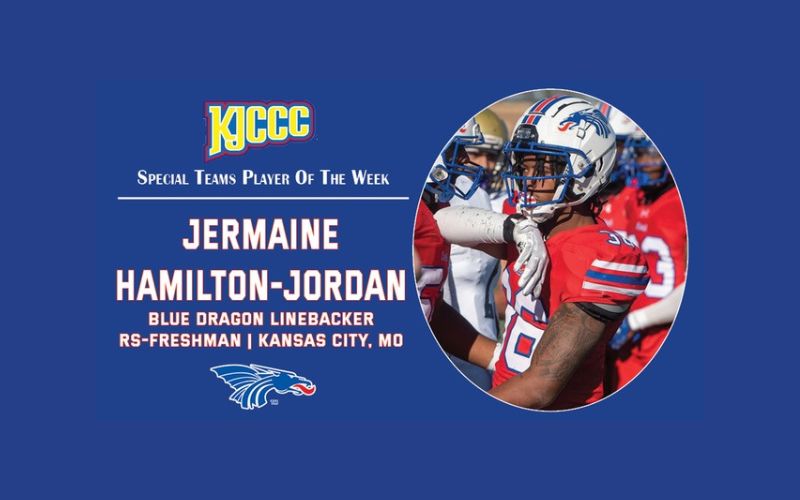 HUTCHINSON, Kan. – With an undefeated regular season in jeopardy with less than 3 minutes remaining, Hutchinson Community College redshirt freshman linebacker Jermaine Hamilton-Jordan came up with the biggest play of the game for the No. 1-ranked Blue Dragons.

Hamilton-Jordan blocked a punt, which was returned for a go-ahead touchdown with 2:38 remaining to lift the top-ranked Blue Dragons past No. 4 Iowa Western 29-28 on Saturday. Hamilton-Jordan was named the Jayhawk Conference Football Special Teams Player of the Week.

Hutchinson trailed 28-17 with 8:11 to play in the fourth quarter. The Dragons still trailed 28-23 with less than 3 minutes to play.

After the Blue Dragons forced a key defensive stop and forced a Reiver punt, Hamilton-Jordan broke around the left end of the punt formation and blocked a Reiver punt that was scooped up at the 40 and returned for a go-ahead touchdown with 2:42 to play for a 29-28 lead.

After he blocked the punt, Hamilton-Jordan sprinted his way downfield and provided the final block to allow Jaimelle Claytor to score the touchdown.

Hamilton-Jordan also provided a tackle each on kickoff coverage and on punt coverage.

This is the fourth time this season a Blue Dragon player has earned KJCCC Special Teams honors. Return specialist Darby Roper was the Week 2 winner. Kicker Cole Segraves won twice in Weeks 7 and 9.

Overall, Blue Dragon player have won a total of 12 conference Player of the Week awards.