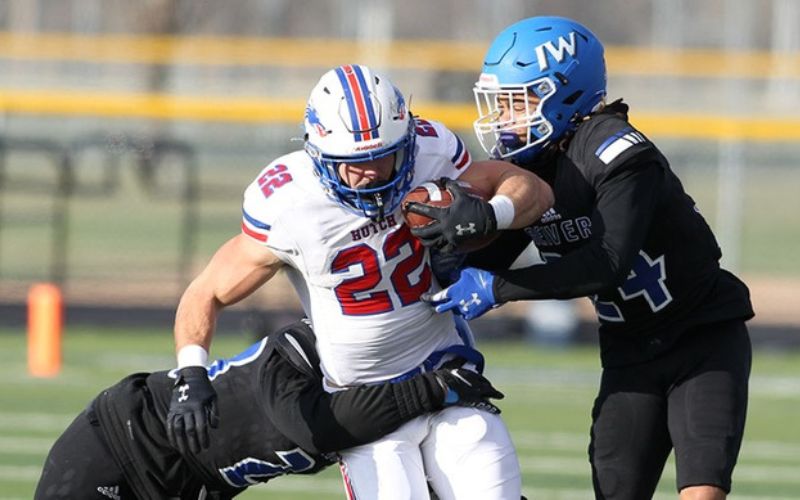 Sophomore Dylan Kedzior had 212 total yards and two touchdowns to help the No. 1 Blue Dragons rally for a 29-28 victory over No. 4 Iowa Western on Saturday at Council Bluffs, Iowa.

COUNCIL BLUFFS, Iowa – The top-ranked Hutchinson Community College Football team was on the ropes Saturday at No. 4 Iowa Western.

Trailing by 11 points as the game entered the middle stages of the final quarter at Titan Stadium, the Jayhawk Conference champion Blue Dragons rallied, getting huge plays from running back Dylan Kedzior, the special teams and Rodney Green Jr., to pull off a thrilling 29-28 victory over the Iowa Conference champion Reivers in the regular-season finale for both teams.

The Blue Dragons improve to 10-0, reaching 10 victories in a season for the eighth time in program history, the first since 2019. The lone-remaining undefeated team in the nation, the Blue Dragons secured a spot and will play host to one of the NJCAA National Playoff semifinal games on December 3. Officially pairings won’t be released until November 21. Iowa Western fell to 8-2 and became one of several two-loss teams battling for the last two playoff spots.

The Blue Dragons extended the second-longest winning streak in program history to 16 games.

That streak was in serious jeopardy when Iowa Western took a 28-17 lead on Jaden Koger’s 4-yard touchdown run with 8:34 to play in the fourth quarter.

The Blue Dragons had an immediate response when two plays after the Reiver kickoff, Kedzior broke loose for a 70-yard touchdown run with 8:11 to go. The Dragons missed on a two-point conversion and trailed 28-23.

Two possessions later, the Blue Dragon defense forced a Reiver punt. Jermaine Hamilton-Jordan broke free around the left side of the protection and blocked the Iowa Western punt. Jaimelle Claytor scooped up the ball and returned it 40 yards for a go-ahead touchdown. The two-point try failed and the Dragons led 29-28 with 2:42 remaining in the game.

Iowa Western converted a fourth-and-11 to keep its final drive alive. The Reivers got to the Dragon 40. On second down, Rodney Green Jr. sacked James Graham for a 16-yard loss. Iowa Western spiked the ball to stop the clock and its fourth-down Hail Mary pass sailed out of bounds on the final play to clinch the Blue Dragon victory.

The Blue Dragons earned the victory despite having possession of the ball for only 22 minutes, 43 seconds. The Dragons were also outgained 381-307. Iowa Western had 23 first downs to Hutchinson’s nine.

Quarterback Dylan Laible completed 13 of 27 passes for 220 yards with two touchdowns and one interception. Laible was sacked four times.

Malik Benson had four receptions for 75 yards, including a 67-yard touchdown reception in the first quarter. Marcello Bussey had four catches for 43 yards.

Iowa Western scored on the opening drive of the game with a 14-yard rushing touchdown by starting quarterback Aiden Niedens on a seven-play, 74-yard drive.

After Benson’s 67-yard reception just 1 minute, 20 seconds later tied the game at 7-7, the Blue Dragons took a lead after freshman kicker Cole Segraves nailed a 44-yard field goal to give the Blue Dragons an early 10-7 lead with 5:40 in the first quarter. Iowa Western grabbed the lead back on the ensuing kickoff with a 90-yard kickoff return for a touchdown by Koger and Iowa Western regained the lead at 14-10 with 5:27 left in the first quarter.

After Iowa Western missed a field goal with just over a minute left in the second quarter, the Blue Dragons seized the momentum before the half as Laible hit Kedzior streaking up the middle for a 76-yard touchdown reception to give the Blue Dragons the 17-14 lead.

The Reivers went up two scores with a 61-yard touchdown pass from James Graham to LJ Fitzpatrick with 8:41 in the third quarter and a 4-yard touchdown run by Koger with 8:34 remaining in the fourth quarter.

The next Blue Dragon drives saw the momentum move over to the Dragon sideline with Kedzior’s 70-yard touchdown run.