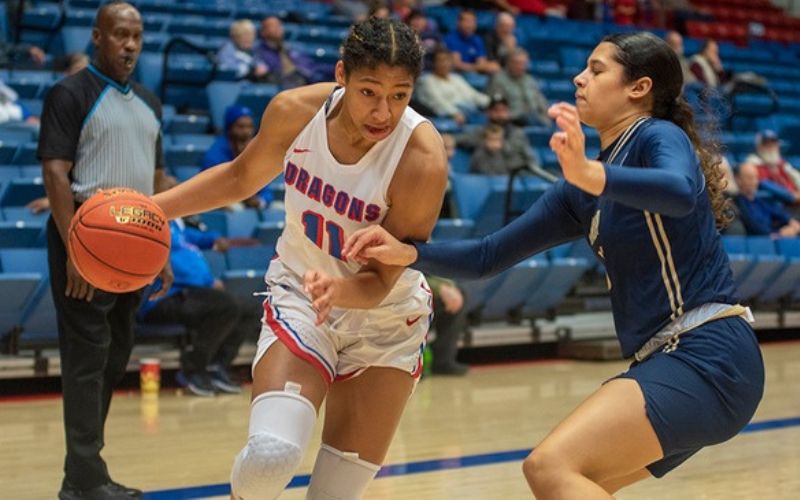 The Blue Dragons improved to 7-0 overall and 1-0 in the Jayhawk Conference. The Pirates fell to 4-3 overall and 0-1 in the KJCCC. The Dragons travel to Cloud County at 2 p.m. on Saturday in Concordia.

The Blue Dragons rebounding helped offset a tough offensive night that saw Hutchinson shoot 30.3 percent overall (20 of 66). The Dragons hit a season-low 2 of 19 from 3-point range and were 19 of 32 from the free-throw line.

Williams had her sixth 20-point game of the season with 21 points on 7 of 17 shooting and two 3-pointers. Sophomore Kali Howard had 11 points and nine rebounds. Sophomore Morgan Browning, freshman Journey Armstead and Duffy all had seven points.

The Blue Dragons jumped out to a 7-2 lead just 3:15 into the contest. The Pirates tied the game at 10-10 with 2:54 to go on a Sabrina Larsson jumper. The Dragons closed the opening quarter on a 10-2 run and led 20-12 after two Leata Te Nana-Williams free throws with four seconds left in the quarter.

A quick 6-0 run to start the third quarter helped Hutchinson build a game-high 16-point lead at 42-26 after a Williams’ layup with 7:22 remaining. The Dragons then missed 11 of their final 13 shots in the third quarter. With Hutchinson leading 44-28, the Pirates held the Dragons scoreless for 5 1/2 minutes and pulled with 44-38 with 51 seconds left. Natalie Payne scored inside with 24 seconds to play to give the Dragons a 46-38 lead heading to the fourth quarter.

Independence continued to chip away and pulled within 50-48 after a Maxey 3-pointer with 6:25 to play in the quarter. A Browning 12-foot jumper started a key 7-0 run over the next 2 minutes. Howard scored with 4:07 to play to up the Dragon lead to 57-48. The Pirates cut the lead to two possessions, but the Dragons maintained the lead and earned a season-opening conference victory for the first time in two seasons.