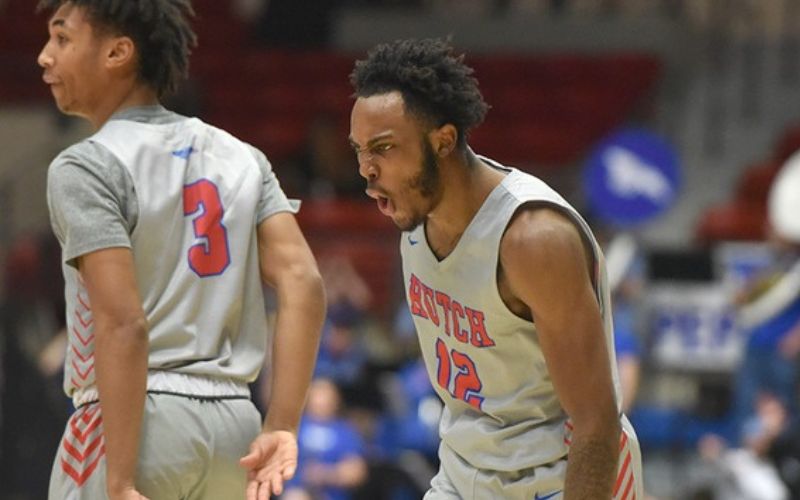 Aaron Potter reacts after hitting a 3-point goal in the second half of No. 4 Hutchinson's 99-94 win over Independence on Wednesday at the Sports Arena. (Billy Watson/Blue Dragon Sports Information)

HUTCHINSON, Kan. – Aaron Franklin had his third double-double of the season and the Hutchinson Community College Men’s Basketball team pulled off a defensive feat not done since 2012 on Wednesday night.

The No. 4-ranked Blue Dragons rallied from an early 15-point deficit to earn a 99-94 Jayhawk Conference victory over the Independence Pirates at the Sports Arena.

Hutchinson improved to 7-0 and 1-0 in the KJCCC. The Blue Dragons travel to Cloud County at 4 p.m. on Saturday in Concordia. Independence falls to 2-5 overall and 0-1 in the league.

Hutchinson was held to less than 100 points for the first time this season, ending a program record six-straight games of scoring in triple figures.

The Blue Dragons shot 44.8 percent (39 of 87), including 13 of 40 from 3-point range and 8 of 11 from the foul line. The Dragons were outrebounded 43-41. The Dragons had 26 assists and 20 turnovers. Steele Gaston-Chapman had a season-high seven assists. Kernan Bundy had five assists.

Johan Nziemi scored 34 points on 13 of 15 shooting and 8 of 10 shooting from the line. Independence had 24 turnovers.

The Blue Dragons scored just six points over the first 5 minutes, 12 seconds of the first half. The Pirates led 21-6 after a 10-0 Independence run. Potter snapped that run with a 3-pointer at the 14:33 mark. The Pirates maintained a double-figure lead through the middle stages of the first half, holding a 41-28 lead with 6:57 left.

Garrison and Franklin hit back-to-back jumpers and then Garrison nailed a 3-pointer to cut the Dragon deficit to 43-35 with 4:34 to play in the half. Independence scored four in a row, but the Blue Dragons ended the half on a 12-2 run and pulled within 49-46 after a Garrison bucket with 33 seconds to play in the first half.

Franklin took the lead back for good with a 3-pointer with 4:53 remaining. The Pirates pulled within 95-94 after an Nziemi layup with 49 seconds to play in the game. Franklin scored with 34 seconds left for a 97-94 lead and Bundy clinched the victory with two free throws with 1 second to play in the game.