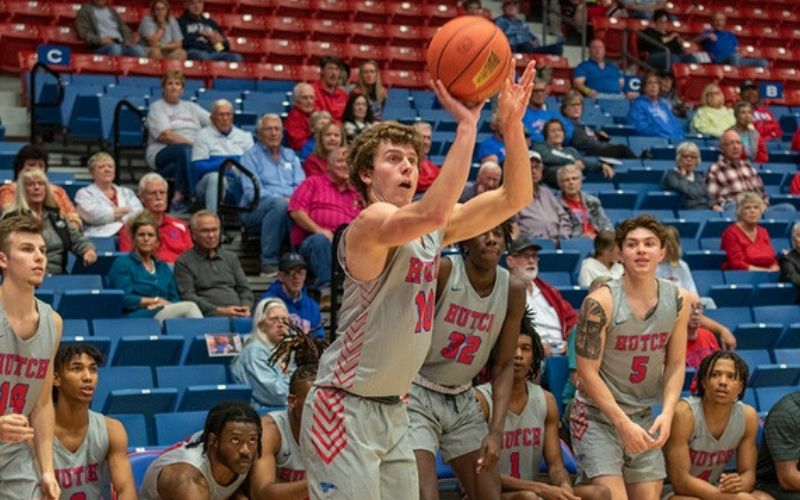 HUTCHINSON, Kan. – One year ago, the Hutchinson Community College men’s basketball team tied a single-game record with 14 3-pointers in a season-opening victory over Fort Scott.

The Blue Dragons did one better, actually four better against the Greyhounds in the 2022-23 season opener on Tuesday night at the Sports Arena.

No. 13 Hutchinson sank a single-game record 18 3-pointers in a 124-101 victory over Fort Scott. The 1-0 Blue Dragons. The Blue Dragons now face No. 7-ranked Triton College in the BSN Sports Tip-off Classic at 7:30 p.m. on Friday at the Sports Arena.

Three times last season, the Blue Dragons tied the single-game record with 14 3-pointers in a game. Hutchinson hit 18 of 49 shot cast from beyond the 3-point line on Tuesday. Sophomores Jayden Garrison and Aaron Franklin combined for 13 3-pointers to lead the Blue Dragons.

Both Garrison and Franklin posted career-high performances against the Greyhounds.

Garrison scored a team- and career-high 29 points on 9 of 13 overall shooting. Garrison hit 7 of 11 from 3-point range.

Franklin’s career-high 28 points consisted of 11 of 22 overall shooting and 6 of 11 from long range. His back-to-back 3-pointers within the final 24 seconds of the first half gave the Dragons a 58-40 halftime lead. Franklin also finished with a career-high eight rebounds.

Only one other Blue Dragon reached double figures on Tuesday. Freshman Kernan Bundy had 10 points.

Thirteen of 14 Blue Dragons to suit up scored in the game. Ty Frierson and Jackson Leyba had nine points each. Steele Gaston-Chapman and Antonio Green had seven points each.

The 124-points scored on Tuesday are the most scored by the Blue Dragons on opening night, besting the 122 points scored last season against Fort Scott.

The Blue Dragons shot 46.8 percent overall for the game (44 of 94). The Dragons hit 18 of 22 from the free-throw line. Hutchinson had a slight 47-44 rebounding advantage, but committed 28 turnovers in the game.

The Dragons also had a team-record 24 steals in the game. Green had a game-high five steals.

Baker Beal scored a game-high 33 points, going 13 of 15 from the foul line. Clance Crosby had 24 points and Andre Morris had 13 points.

Ra’Sean Frederick‘s layup just 9 seconds into the second half gave the Dragons their first 20-point lead. The largest leadoff the game for Hutchinson was 26 points after Ty Frierson’s two free throws with 8:48 to play gave the Dragons a 96-70 lead.

GAME NOTES – The Blue Dragons are now 69-23 all time in season openers. … The Dragons won their 13th consecutive game against Fort Scott and are 36-13 all-time against the Greyhounds, including 18-1 in games played at home. … Both teams scored the most points in series history and the 225 combined points were the most in series history. … The 225 combined points are the seventh-most in Blue Dragon single-game history.