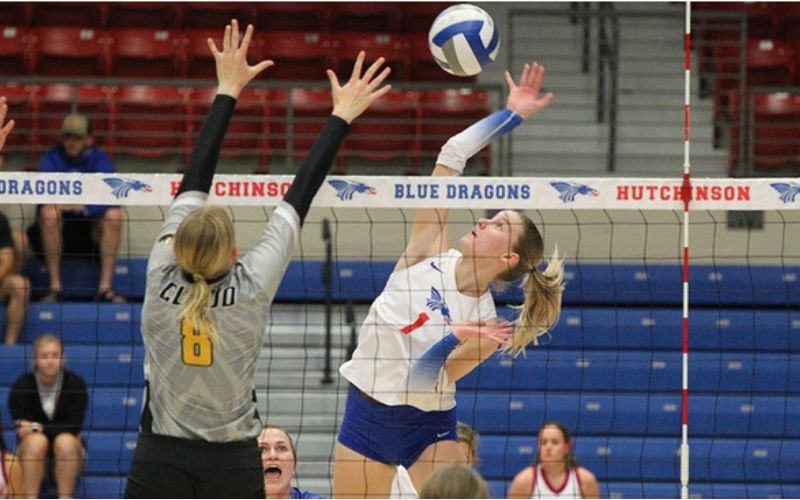 Perline Fery swings for one of her career-high 12 kills in the Blue Dragon Volleyball team's 3-0 Region VI Tournament opening-round victory over Cloud County on Wednesday at the Sports Arena. (Billy Watson/Sports Information)

HUTCHINSON, Kan. – Freshman Perline Fery made her first career start a memorable one by leading the Hutchinson Community College Volleyball team to a postseason victory.

Fery had a career-high 12 kills to lead the Blue Dragons to a 25-21, 25-19, 25-12 victory over the Cloud County Thunderbirds in the opening round of the Region VI Tournament on Wednesday at the Sports Arena.

The Blue Dragons (26-11) advance to the Region VI semifinals on Friday in Liberal. Hutchinson will face Jayhawk West co-champion Butler, who fought off two match points against in the fifth set to defeat Colby 17-15 in the final set. Hutchinson and Butler will play one hour after the conclusion of the Seward County/Dodge City match, which is scheduled to begin at 5:30 p.m. at the Greenhouse in Liberal.

Fery hit a season’s best .500 in her first career start with 12 kills on 22 attacks and only one error. She got stronger and the match progressed. Fery had two kills on .500 hitting in the opening set. She had four kills on .333 hitting in the second set and exploded in the third set with six kills on nine swings for a .667 attack percentage.

Sophomore Blondie Penaflor had nine kills on .750 hitting with no errors on 12 attacks. Penaflor added one solo block and seven block assists.

Katelyn Brogan had eight kills to lead the Thunderbirds (12-18).

Set 1: The opening set was back-and-fourth with four lead changes and seven ties. Golden’s first ace of the match tied the set at 4-all. A Golden kill on a Cloud overpass gave the Dragons an 11-8 lead. Cloud County then went on a 5-1 run to lead 13-12. The run could have been 6-1 when a Golden attack was originally called out, but was overturned because the officials said there was a touch. Marcela Garcia’s kill gave the Thunderbirds a 17-16 lead. Tied at 20, A Golden kill started a set-losing 5-1 run. A Penaflor/Sophie Connor double block on set point gave the Dragons a 25-21 win.

Set 3: The Dragons had a powerful start to the third set with back-to-back Penaflor/Golden blocks, three Golden kills and a Serrano ace. Fery then had kills at 11-2, 14-5 and 18-6. The Dragons blitzed Cloud County with .560 hitting in the final set. The match ended on a 3-0 Dragon run with a Fery kill, Golden ace and Fery kill.