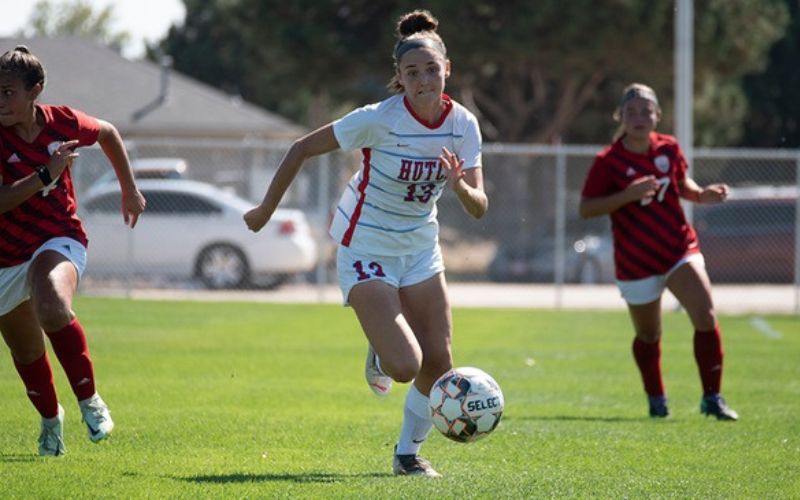 Hadlie Lowe had a goal and the game-winning assist in overtime in Hutchinson's 2-1 win over No. 15 Coffeyville on Saturday at the Salthawk Sports Complex. (Andrew Carpenter/Blue Dragon Sports Information)

After a tremendous counter attack started by sophomore Hadlie Lowe, Delgado delivered the game-winning goal 1 minute, 47 seconds into overtime to lift the Blue Dragons to a 2-1 victory over No. 15 Coffeyville at the Salthawk Sports Complex. Hutchinson defeated No. 17 Cowley 2-1 on Wednesday in Arkansas City.

One minute, 25 seconds into overtime, Coffeyville had a corner kick from the left side of Blue Dragon sophomore goalkeeper Madison Quarles. The kick bounced around in front of the net and was cleared by freshman defender Kendra Brungardt. She flipped a pass to Lowe, who beat a Coffeyville player to the ball.

After two dribbles, Lowe made a quick pass to Delgado, who immediately returned the ball to Lowe past midfield. Again Lowe beat a Coffeyville player to the ball and sprinted toward the goal. Drawing a second Raven defender to her, Lowe made a deft pass to a breaking Delgado, who was sprinting down the left side of the penalty box. Delgado scored the game winner from 5 yards out.

Lowe had her fifth multi-point game of the season with a goal and an assist.

Lowe gave the Dragons a 1-0 lead 4:43 into the game when a Julia De Souza pass left Lowe in front of a nearly wide-open net.

The Dragons took that 1-0 lead into halftime thanks to four big saves from Quarles in the opening half.

Coffeyville tied the game with a great individual effort by leading scorer Thayline Teixeria with 13:03 to play in the second half. She stole the ball near the top of the Hutchinson penalty box, worked were way into scoring position and scored into a wide-open net to tie the game.

Quarles (4-0) made a career-high six saves in the game.