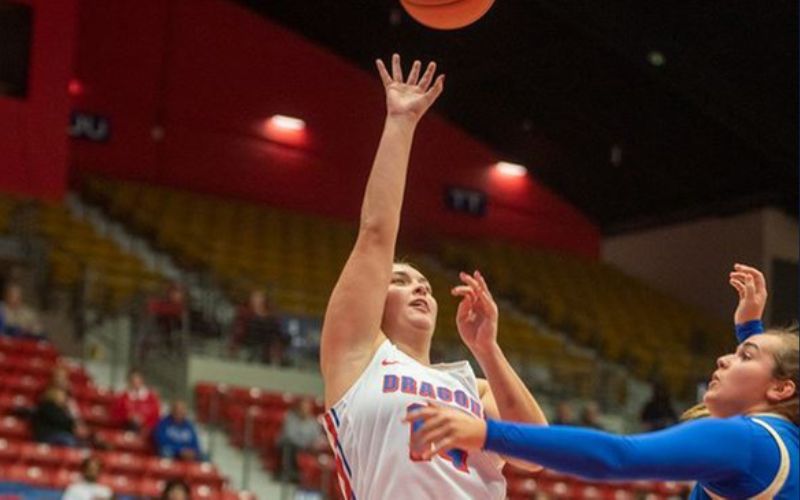 Bree Horyna and the Blue Dragon women's basketball team got off to a slow start and the Dragons fell 75-65 to Cloud County on Saturday in Concordia. (Andrew Carpenter/Blue Dragon Sports Information)

CONCORDIA, Kan. – Trailing by 13 points after the opening quarter was a hole too deep to dig out of for the Hutchinson Community College Women’s Basketball team as the No. 4-ranked Blue Dragons suffered their first loss of the season on Saturday at Cloud County.

The No. 4-ranked Blue Dragons had a season-low four 3-pointers and shot only 37.7 percent on a 76-65 loss to the Thunderbirds at the Arley Bryant Gym.

Hutchinson fell to 7-1 overall and 1-1 in the Jayhawk West. The Blue Dragons travel to Pratt on Tuesday. Cloud County improved to 6-1 and 2-0.

Cloud County closed the first quarter with a 13-1 run over the final 5:43 of the quarter to lead 21-8 after 10 minutes. The largest deficit the Dragons faces was 15 points with 3:11 to play in the third quarter after Cloud built a 57-42 lead after an Alize Ruiz 3-pointer.

Hutchinson got as close as seven points after a Journey Armstead steal and Monae Duffy transition layup cut the Thunderbird lead to 63-56 with 7:00 to play. Natalie Payne scored with 2:04 remaining to cut the deficit to 72-64.

After starting the game 2 of 16, the Blue Dragons finished shooting 26 of 61 (37.7 percent) hitting a season-low 4 of 21 from 3-point range and 15 of 26 from the foul line. The Blue Dragons committed 15 turnovers, including 10 in the fourth quarter. Hutchinson was outrebounded for the first time this season, 42-33.

Duffy led the Blue Dragons to 15 points and eight rebounds. Duffy was 6 of 13 shooting.

Armstead was the only other Dragon to score in double figures with 14 points, four rebounds, four assists and three steals.

Maimouna Sissoko had a double-double to lead Cloud County with 22 points and 10 rebounds. She was 10 of 19 shooting from the field. Ruiz finished with 20 points and Te araoa Soponga had 15 points.

The loss to Cloud County snapped a six-game winning streak by the Blue Dragons against the Thunderbirds.