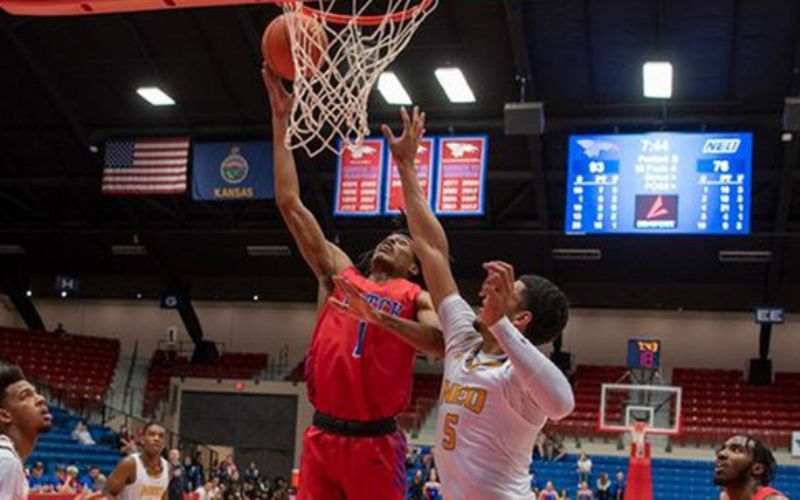 Antonio Green had a season-high 19 points, but the Blue Dragons dropped their first game of the season, a 90-75 loss to Cloud County on Saturday in Concordia. (Andrew Carpenter/Blue Dragon Sports Information)

CONCORDIA, Kan. (bluedragonsports.com) – Chalk it up to “one of those days” for the No. 4-ranked Hutchinson Community College Men’s Basketball team on Saturday at Cloud County.

The Blue Dragons were held to a season-low offensive output and the Thunderbirds shot better than 65 percent as Hutchinson’s first true road game of the season became its first loss in a 90-75 setback at the Arley Bryant Gym.

Hutchinson dropped to 7-1 overall and 1-1 in the Jayhawk Conference. The Dragons travel to Pratt on Tuesday for a 7:30 p.m. matchup. Cloud County improved to 5-2 overall and 2-0 in the KJCCC.

Cloud County jumped out to a 7-0 lead with three point-blank buckets. Dadrevius Weathers hit a 3-pointer to give the Dragons a 17-15 lead with 13:04 to play. The Dragons then went scoreless for the next 4 minutes and fell behind 23-17. After Aaron Potter snapped that dry spell with a layup with 9:04 to play, the next Dragon points didn’t come until the 6:44 mark on a Kernan Bundy 3-pointer.

The Blue Dragons held Cloud County scoreless for a span of nearly 3 full minutes and pulled within seven points at 56-49 after a Landon Wagler layup with 12:11 to play. The Blue Dragons made it a one-possession game with a Bundy dunk and two Antonio Green free throws. The Cloud lead dwindled to 61-58 with 10:07 remaining. Then a Jayden Garrison 3-pointer trimmed the deficit to two at 65-63 with 8:31 remaining.

From that point, Cloud County outscored the Blue Dragons 25-12 to cement their second-straight win over Hutchinson.

Green came off the bench to lead the Blue Dragons with a season-high 19 points. Green was 6 of 8 from the field with a pair of 3-pointers and was 5 of 5 from the foul line.

Matang Athian hit 13 of 15 shots and finished with a game-high 27 points to lead the Thunderbirds. Corey Sawyer and Cheikh Sow scored 17 points each.