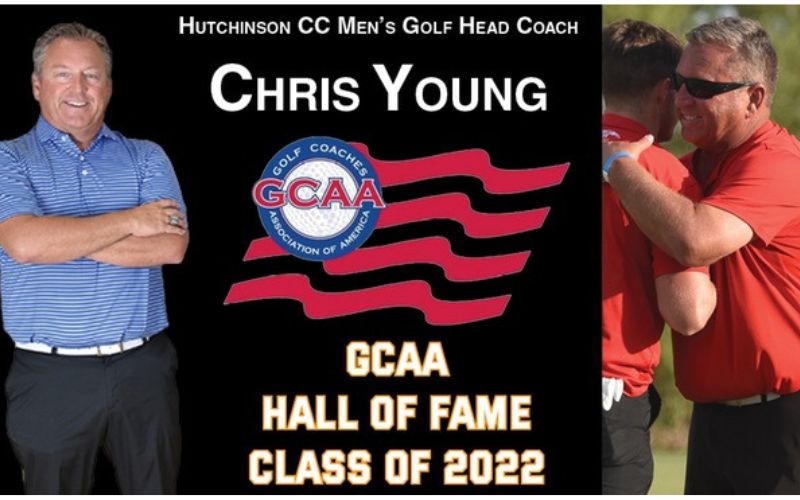 HUTCHINSON, Kan. – Now in his 23rd season as the head coach of the Hutchinson Community College men’s golf team, Chris Young took a struggling Division II program and transformed it into a nationally elite NJCAA Division I powerhouse.

Now the leader of the two-time defending NJCAA men’s golf national champion Hutchinson, Young has reached the pinnacle of his profession.

Young is one of four people to be inducted to the 2022 Golf Coaches Association of America Hall of Fame.

The GCAA Hall of Fame induction ceremonies will be on December 5 in Las Vegas.

“I am very honored to even be considered for the Hall Of Fame, not to mention being voted into the Hall by my peers,” Young said. “I truly am humbled and blessed by this honor and look forward to being part of such an exclusive bunch.”

Young took over the Blue Dragon men’s golf program in 2000. Before Young’s arrival, the Blue Dragons qualified for the Division II national tournament only once in the previous 13 years.

Young immediately moved the program to the Division I level in 2000. He had the Blue Dragons at nationals in 2001, a 20th-place finish.

The Blue Dragons haven’t missed out on the national tournament since.

Fast-forward to 2021 at The Rawls Course in Lubbock, Texas – the Blue Dragons were in the thick of a national championship chase for the first time. Hutchinson passed that test with flying colors, defeating Odessa by nine strokes. Ben Partridge defeated teammate Harry Crocket in a four-hole playoff to the win individual national championship. Along with Partridge and Crockett, Cameron Rios-Ceballos earned All-America honors.

One year later, the Blue Dragons went wire-to-wire for the second straight year and never looked back for a 20-stroke victory at the Odessa Country Club in Odessa, Texas. The Blue Dragons posted the largest winning margin in nearly 30 years and shot six strokes better than 2021 with a 72-hole total of 1,130.

A record four Blue Dragons earned All-America honors: Dominic Clemons, who lost a two-hole playoff for the individual national title, and Blake Saffell and Partridge were first-team All-Americans. Crockett was a third-team All-American.

“What great honor for Coach Young,” Blue Dragon Athletic Director Josh Gooch said. “Being enshrined into the GCCA is well deserved as coach Young has and continues to be a first-class mentor and coach to all the young men on his teams.

“The success of his coaching career is no surprise to anyone who has spent quality time with him. Coach’s attention to detail from recruiting evaluation, stats analysis, course management along with personal relationships separate him from many others. I am proud to have witnessed all of this first hand and now to see him honored is awesome.”

Before coming to Hutch in 1997, Young was at the University of Nebraska where he was an assistant coach for the Husker women’s basketball program under Angela Beck for three years. Nebraska was 51-33 in his three years in Lincoln.

Young is a native of Kearney, Nebraska. He graduated from the University of Nebraska at Kearney in 1993. Young and his wife, Kricket, have three children: Cole, Kennedy and Carter.