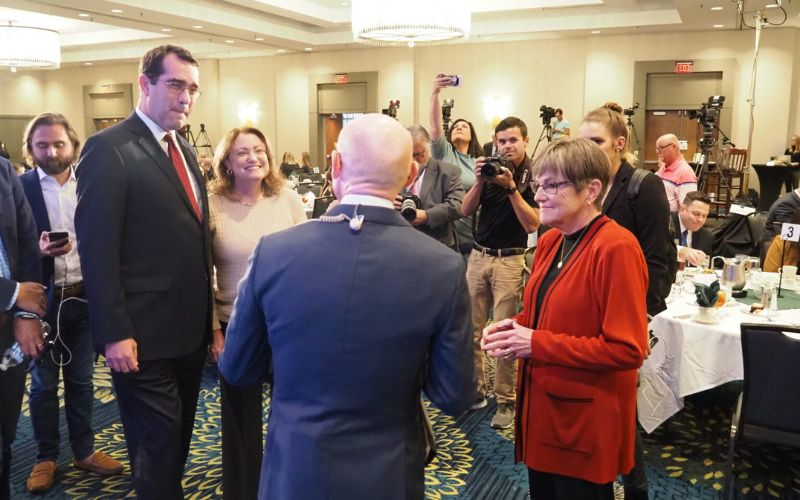 OVERLAND PARK, Kan. — Gov. Laura Kelly and Attorney General Derek Schmidt took on the role of gubernatorial debate moderator Wednesday by demanding answers to pointed questions posed to each other as the tight gubernatorial race lunged toward the Nov. 8 finish.

Kelly, a Democrat who has sought reelection by touting success in dealing with shortcomings of former Gov. Sam Brownback, told about 250 members of the Johnson County Bar Association that she ran in 2018 to bring fiscal sanity to the state budget, fully fund K-12 schools, revitalize the highway program, cut taxes and reform the beleaguered foster care system. She said her second term would prevent the state from slipping backward on those achievements.

“Everybody in this room remembers what this state looked like four years ago,” Kelly said. “Are we better off under Brownback than we are now?”

Schmidt, the Republican nominee and three-term attorney general, said Kansans were less concerned about decisions by a former governor than about mistakes of the Kelly administration and those of President Joe Biden.

“I have a question for you, governor,” Schmidt said. “Do you think America and Kansas is better off today than they were before Joe Biden?”

The one-hour debate livestreamed and broadcast on public television in the Kansas City market excluded two candidates who will be on the November ballot. Dennis Pyle, a state senator from Hiawatha, who renounced his membership in the GOP to run as an independent candidate for governor, and Libertarian Party nominee Seth Cordell weren’t welcomed on the stage.

About 50 supporters of Kelly waved signs to welcome people to the DoubleTree Hotel in Overland Park, but Schmidt had no comparable presence among supporters.

This sedate Johnson County debate stood in contrast to the Sept. 10 encounter between Schmidt and Kelly at the Kansas State Fair in Hutchinson, which featured singing, chanting, cheers and boos from a participatory crowd.

“I’d ask him to return my phone call,” said Kelly, who had a thank-you package delivered to his official residence for igniting a flood of positive comments about Kansas.

Schmidt, who lauded Kelly’s attempt to push back against Adams, said Kansans were proud of their state and didn’t want much to do with New York City’s brand of crime, violence and outrageous cost of living.

“All things that I’m running for governor to make sure we don’t do in Kansas,” Schmidt said.

Schmidt, who has been endorsed by former President Donald Trump, said he was committed to the race for governor because of the need to speak for people who suffered during the COVID-19 pandemic because Kelly declared their jobs nonessential or were denied unemployment benefits due to incompetence at the Kansas Department of Labor. He said he was running for school children compelled to take part in online instructional formats.

He said he would strive to represent taxpayers by reducing growth of the state government’s budget. He also would speak for families, including children, struck down by drugs laced with lethal doses of fentanyl transported to Kansas from Mexico.

“I am running for governor because Kansas can be so much better,” Schmidt said.

During her first term, Kelly said she injected fiscal austerity into state government to produce a $1.5 billion surplus and a $1 billion rainy-day fund. She said she would focus in her new term on the immediate elimination of the 6.5% state sales tax on groceries, rather than a three-year phase out.

She had proposed the state portion of the food sales tax evaporate on July 1, but the Republican-controlled Kansas Legislature blocked that initiative.

In response, Schmidt said Kelly should have signed a 2019 bill that included repeal of the food sales tax along with a Christmas tree list of tax breaks sought by GOP legislators and lobbyists.

Kelly and Schmidt illuminated a policy gap between themselves in terms of crime and punishment. The Democratic governor called for replacement of the state’s death penalty statute with a law requiring those sentences be converted to life in prison without possibility of parole.

Kelly said the state was spending millions of dollars on appeals by people sentenced to death, while Kansas hadn’t executed anyone since 1965.

The current statute was enacted in 1994 when Democratic Gov. Joan Finney chose not to veto the bill. In 2010, the Kansas Senate fell one vote short of advancing legislation that would have replaced the death penalty with life without the possibility of parole for the crime of aggravated murder.

Schmidt, who recalled making decisions as attorney general on whether to seek the death penalty against alleged murderers, said he supported preservation of capital punishment.

“I have sat in the room with families whose loved ones have been heinously killed. I believe there are times it is appropriate and just,” he said.

In terms of abortion, Schmidt and Kelly made reference to the overwhelming rejection in August of a proposed amendment to the Kansas Constitution that would say the document didn’t guarantee women bodily autonomy and the right to abortion.

The amendment was placed on a statewide ballot by a two-thirds majority vote of the Legislature, but the measure was defeated by more than 170,000 votes. The amendment was opposed by Kelly and endorsed by Schmidt.

“We saw on August 2 that overwhelming majority of Kansans believe a woman’s right to make private medical decisions should rest with her and not politicians,” Kelly said.

Schmidt said voters of Kansas made clear the majority view of the abortion amendment. He promised to work as governor to shield abortion restrictions in Kansas law that he assumed would be challenged in the future.