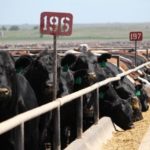 The President of a major live animal exporting company says the U.S. should be better targeting growing populations and economies for livestock exports outside of China.

Tony Clayton with Clayton Agri-Marketing said the top two importers of U.S. live cattle the last three years have been Pakistan and Vietnam with other Asian countries offering strong opportunity.

“Since November, we have made six shipments of cattle to Bangladesh,” he said. “So, you think about a country smaller than Iowa that’s going to move in the top ten population in the world.”

Adversely, because of COVID, Clayton said…

“Of the last 11 charters of pigs to go to China, nine have failed.”

He said pilot and plane quarantines prevent live animals from effectively moving through the country.

Where should the U.S. be targeting livestock exports

Pattern remains active across the Nation; milder days ahead from the Plains, eastward