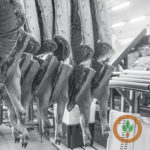 The USDA has trimmed expectations for pork and turkey production, while increased outlooks for beef and broilers.

Beef production is pegged at 27.99 billion pounds, up 68 million due to second half slaughter expectations, with an average steer price of $141.30 per hundredweight, $.80 higher, along with higher exports against lower imports and per capita consumption.

Pork is seen at 27.078 billion pounds, down 81 million because of a slower third quarter slaughter pace, with an average barrow and gilt price of $73.80 per hundredweight, a gain of $3, against lower imports, exports, and consumption.