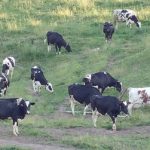 USDA also revised the September milk production figures down by 13 million pounds or a tenth of a percent.

Production per cow in the 24 major dairy states averaged 2,021 pounds in October.  That’s 18 pounds per cow higher than a year ago.

The number of milk cows on U.S.

Consider lessons learned in recent years when planning for ’23