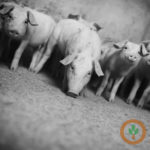 The USDA says the June 1st hog and pig inventory was down 1% on the year and farrowing numbers point to even tighter supplies later this year and next year.