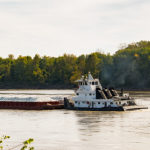 Andrew Walmsley, senior director of government affairs, tells Brownfield agriculture infrastructure has several critical areas that are suffering. “Driver shortages and high diesel prices on the trucking side.  You’ve got low water levels on the Mississippi and that whole river system into the Ohio and Missouri Rivers that is disrupting barge movements of grain down the river, which is critical for domestic movement but internationally.”

He says a rail strike could begin as early as November 19 but could be averted.