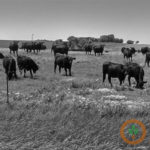 Two cases of a new, potentially dangerous disease carried by the Asian Longhorned Tick have been detected in Kentucky.

Dr. Kate Flynn says Theileria Orientalis has been diagnosed in two beef herds, one in Fleming County (northeast Kentucky) and another in Hart County (southern Kentucky).  In each instance, a beef breeding bull became ill and died.  There is no relationship between the herds.

Once an animal is infected with the disease it becomes a carrier and can become a source of infection for other cattle in the herd.  There is no approved effective treatment or vaccine for the disease.

The tick has been previously detected in other counties in Kentucky (Boone, Metcalfe, Floyd, Martin, Madison, Breathitt, and Perry) and it is possible that it is present and undetected in other parts of the state.