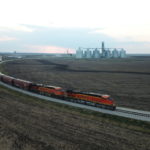 The Fertilizer Institute says American farmers will get fertilizer this spring despite the potential for a rail strike.

Justin Louchheim, senior director of government affairs, tells Brownfield railroads will begin pulling off inputs five days ahead of the deadline due to safety reasons. “That means railroads will stop picking up shipments of ammonia as of this coming Monday.”

Labor unions and the industry have until November 19th to reach an agreement or extend a “status quo” period.

TFI: Fertilizer could come offline as soon as next week but access remains intact