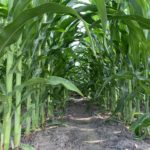 Southwest Iowa farmer Dave McGargill says a two-inch rain at the beginning of the month saved his crop.

“The crops look good,” he said. “We’re all tasseled now and the beans kind of took off and started to grow after that last rain. We’re coming along okay.”

He tells Brownfield disease pressure hasn’t been an issue, but, “The Japanese beetles started to roll in here a week or two ago, but not heavy enough pressure,” he said.